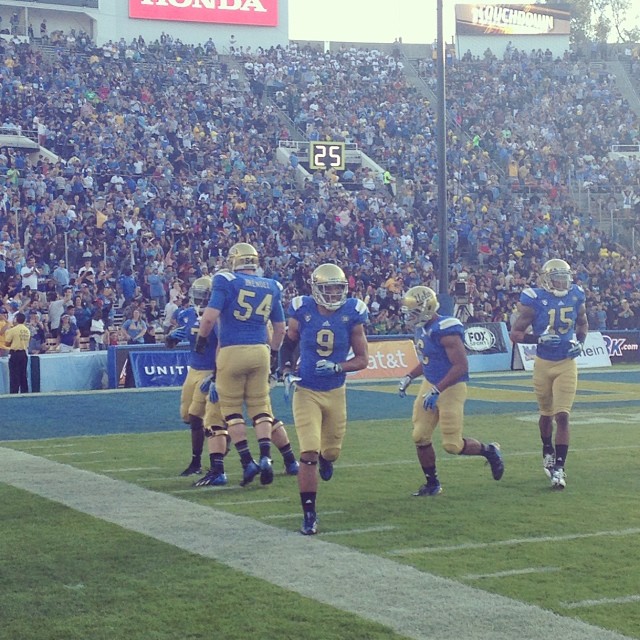 PASADENA—Coming back to the Rose Bowl was just the thing the Bruins needed to stay in the top 25. A 24-point second half moved 20th ranked UCLA over Colorado, 45-23 on Saturday. Brett Hundley threw 19 of 24 with two touchdowns to improve the team’s 6-2 record. The loss keptColorado at the bottom going 0-5 against PAC-12 opponents.

Devin Fuller turned up the excitement at the Rose Bowl with a 76-yard catch from Hundley to overtake Colorado’s field goal lead before the end of the first quarter. The Buffalos came back with a touchdown in the end zone from quarterback Sefo Liufau, who found WR Paul Richardson to gain the lead 10-7. The Bruins ran the middle of the second quarter with Hundley running a touchdown from the 11-yard line with receiver Devin Fuller adding seven more on a six-yard pass ending the first half 21-13 lead.

The Bruins opened the third quarter running both sides of the game under their control, giving the Buffalos little time to regroup. A short run by Hundley near the end zone gave him his second touchdown rush of the game. Damien Thigpen made it 35-13 on a red zone attempt, that gave the Bruins a different opinion on its fans that have been let down on the road.

Colorado made an effort to comeback with a lucky break on the Bruins side with Tony Jones running two yards to cut the Bruins lead in half, but Fuller ended any chance of a late run with an eight-yard run with three and a half minutes left. That allowed UCLA to secure an easy conference win. It wasn’t a total cakewalk for UCLA who took a load of penalties, resulting in 75 yards the Buffalos couldn’t take advantage of.

The Bruins hope that facing more unranked opponents will keep them where they stand going into Arizona next week, before coming home for a two game homestand before the close of the season.