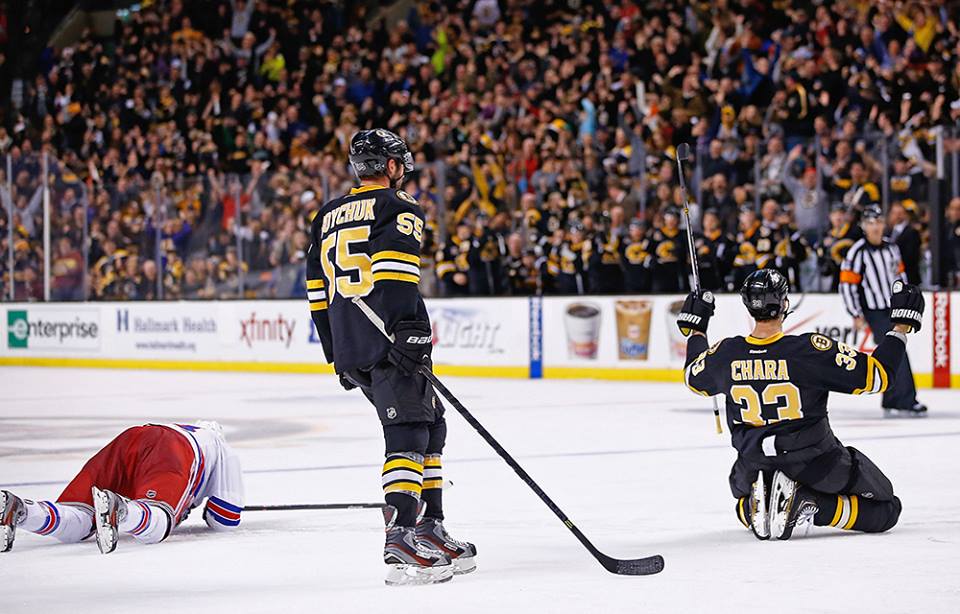 BOSTON—The Bruins gave the Rangers a warm boot out of touchdown garden in the Thanksgiving showdown. Boston scored two goals in the third period to win 3-2 on Friday.

After taking a rough road loss to Detroit in a 6-1 rout, the Bruins hosted a nationally televised game and were embarrassed at home. Both teams began the first period much like a family argument at the dinner table with New York’s Rick Nash and Boston’s Torey Krug roughing each other where Krug’s teammate Adam McQuaid joined in. It gave the Rangers a 5 on 3 advantage that could have given them the early lead, but left the game scoreless.Boston was responsible for taking the lead on Brad Marchand’s snapper that he shot from the side of the net beating goaltender Henrik Lundqvist for his fourth of the year.

Rich Nash got his team evened up, bringing the puck from around the boards and scoring his third against Bruins netminder Tuuka Rask. The Rangers took the lead on Ryan McDonagh’s shot high over the shoulder of Rask to hold the lead through the second period. Boston Captain Zdeno Chara accepted a fight with New York’s Brian Boyle where Chara automatically had the upper hand with his 7’2 stature. Both received fight majors. It began with David Krejci giving a slash on Boyle prior to the fight. The shots between the two stayed under 10 shots each, while the Rangers shot a total of 15 through 40 minutes.

Boston took the Rangers out of the game in the third holding the team to four shots giving them a chance to regain the lead. It started with in the first 95 seconds with Patrice Bergeron tying the game for his seventh goal of the season on a bouncer that cornered into the net perfectly. Chara helped his team take a 3-2 lead on a centering drive that went in for his sixth as Chara is considered the leagues hardest shooter with Lundqvist nor the traffic in front of him seeing the puck go into the net.

Boston is 8-0-2 at home in their past 10 games with Rask in net. He improved to 14-6-2 making a season low 17 saves on 19 shots with a .895 save percentage. Their home success helped them maintain their lead in the Atlantic Division with 38 points. The Rangers and new head coach Alain Vignault go back to Madison Square Garden to host his former team the Vancouver Canucks and former Rangers coach John Tortorella.