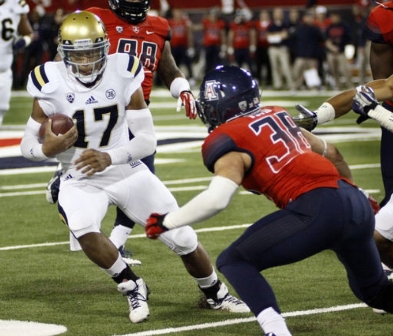 TUSCON—The Bruins ran out of gas, but finished ahead by the skin of their teeth. Running back Myles Jack ran a 66-yard touchdown in the fourth quarter to hang on to their ranking and defeat the Arizona Wildcats 31-26. Quarterback Brett Hundley lead his team with 18 of 25 for 227 yards passing and two TDs.

Hundley opened the game with a big pass to WR Shaquelle Evans who caught a 66 yard pass to leap over the Wildcats 7-3. In the closing minutes during a successful drive, Hundley took it upon himself to run the ball from theArizona 25 and put the Bruins up 14-3.

Wildcats junior running back Ka’Deem Carey put Arizona down by four with a 4-yard run into the end zone. UCLA came up big in the final seconds of the first half with Evans catching a short pass from Hundley to end Hundley’s best first half offense in the past few games.

Both teams began the second half trading field goals in the quarter with the Bruins maintaining an 11 point margin. The Wildcats biggest chance came in the Bruins red zone, as Carey flipped over the Bruins defensive line for the touchdown, but didn’t hold onto the ball when he hit the ground. This gave the Bruins the touchback having been caught by Jack in the end zone.

He took off on a his big rush in the fourth quarter putting the game a little farther away from Arizona at 10:46. The Wildcats weren’t done in their attempt to tarnish the Bruins road record, as Nate Phillips scored his second TD in the quarter to make it a five-point game with eight minutes left. They never caught a break as time fell off the clock to give them one chance on their own 12 where B.J. Denker threw an interception with two minutes left. He ended the night making 20 of 33 on 186 yards with two TDs.

The Bruins victory keeps them behind Arizona State in the PAC-12 South standings as they meet Washington at home next week; Washington also sits on a two-game winning streak against unranked opponents with a .500 records in the conference.