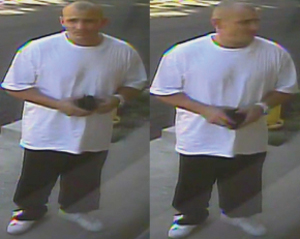 HOLLYWOOD HILLS – Security cameras at a home captured a wanted burglar before he broke into the premises on January 15.

The Los Angeles Police Department released the video in hopes that the public might be able to identify the intruder. The footage shows a Hispanic male approaching the home at around 2:00 p.m. on the 2700 block of La Cuesta Drive right before knocking on the front door to determine if anyone was at the residence. The suspect knocked again before proceeding to the side of the house where he jumped the fence.

It was there that, according to LAPD, the man broke through the rear sliding door with some hard object. The suspect then stole several electronic items, including an Apple laptop and five cell phones. After the break-in, the man fled from the home in an unknown direction.

The camera caught a clear glimpse of the man, and now investigators are asking the public to keep an eye out for him, as he may be responsible for other burglaries in the area. He is described to be around the age of 30, 5 feet 6 inches to 5 feet 10 inches tall and weighing between 200 to 210 pounds. The footage shows the suspect wearing a white t-shirt, black and white striped Adidas sweatpants and white tennis shoes.

If anyone has any information about the crime or the suspect, they are urged to contact the Hollywood Area Detective Division at 213-972-2931. For calls made during non-business hours or on the weekends, the public can also dial 1-877-LAPD-247. Anonymous calls can be placed at 800-222-8477.