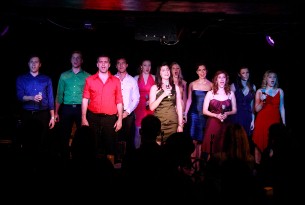 HOLLYWOOD—Cabaret at the Castle has proven there is indeed a market for cabaret in L.A. over the last month, with crowds flocking to performances by Sharon McNight in “Red Hot Mama,” Jake Broder in “His Hipness Lord Buckley” and Edward Sayegh’s “A Night of Rodgers and Hammerstein 2.”

McNight, a cabaret icon in her own right, brought the bawdy brilliance of show biz legend Sophie Tucker to life on stage with numbers like, “You Gotta See Your Mama Every night,” “There’ll Be Some Changes Made,” “Darktown Strutter’s Ball” to the comedy numbers like, “I Don’t Want to Get Thin” and “Hula Lou” to the lilting ballads, including “The One I Love Belongs To Somebody Else” and the “Man I Love.” McNight is a musical theater tour-de-force not to be missed.

Edward Sayegh created an impressive line up of artists in tribute to the great Rodgers and Hammerstein, featuring Gil Darnell, James Snyder, Alli Mauzey, Alli McGinnis, Anthony Carillo, Carolyn Schultz, Reid Lee, Amy Lawrence, Cynthia Stults, Marikah Cunningham and Lisaun Whittingham. This second version of his original tribute to the musical icons drew a standing room only crowd of fans, who were not disappointed in the evening that included scores from stage and film, including “On Your Toes,” “Babes In Arms,” “The Boys From Syracuse,” “I Married An Angel,” “Oklahoma,” “Carousel” and “Pal Joey.”

Cabaret at the Castle’s producer, Matt Patton, is thrilled to announce the remaining 2010 engagements with James Barbour’s “Holiday Concert” on Monday/Tuesday December 6 and 7. The 90 minute program features delightful songs and laughter that is guaranteed to fill the halls with classic hits such as “Jingle Bells” to an interactive “12 Days of Christmas,” as well as an amazing rendition of “Oh Holy Night.” Barbour was nominated for the Drama Desk, Drama League and Outer Critics Awards for Best Actor in a Musical for his portrayal of Sydney Carton in the Broadway musical version of “A Tale of Two Cities,” and won the Sarasota Magazine Best Actor Award for the Asolo Rep pre-Broadway production. He has starred on Broadway in such Tony-Award winning shows as Stephen Sondheim’s “Assassins,” Disney’s “Beauty and the Beast” as The Beast, “Carousel” as Billy Bigelow, “Urinetown” as Officer Lockstock and as Edward Rochester in “Jane Eyre” (Drama League Award nomination). He also appeared in the Broadway production of “Cyrano” and the national tour of “The Secret Garden.”

Patton also announced the highly anticipated return of the famous and very popular “Jim Caruso’s Cast Party” on Wednesday/Thursday, December 8 and 9. Host Jim Caruso and musical director/pianist Billy Stritch are fast becoming as household a name in Los Angeles as they are already in New York. As before, “Jim Caruso’s Cast Party” will take place within The Inner Circle of The Magic Castle (700 Franklin Avenue in Hollywood). Doors will open at 6 p.m. for singers signup, and the open mic-style variety show will start at 8 p.m. The show, which has become a Manhattan mainstay, has taken on a residency at The Magic Castle, turning away hundreds of audience hopefuls each time.

The always sold out in record time engagement features a whose who of talented guests, including Carol Channing, Melissa Manchester, Cybill Shepherd, The Tonics, Joely Fisher, JoAnne Worley, Legally Blonde composers Larry OKeefe and Nell Benjamin, Taylor Dayne, Jason Graae, Debby Boone, Shoshana Bean, internet sensation Miranda Sings and Broadway leading man James Barbour. “Jim Caruso’s Cast Party” is a wildly popular weekly soiree that has been bringing a sprinkling of Broadway glitz and urbane wit to the legendary Birdland in New York City every Monday night for the past seven years. It is a cool cabaret night-out enlivened by a hilariously impromptu variety show. Showbiz superstars hit the stage alongside up-and-comers, serving up jaw-dropping music and general razzle-dazzle. Cast Party is the ultimate spot to mix and mingle with talented show folk and their fans. The buoyant, sharp and charming Caruso guides the entire affair like a bubbly cruise director, musical genius Billy Stritch holds court at the ivories, and the audience is invited to participate in the festivities! Its the party that would happen if somehow David Letterman and Ed Sullivan threw a hip house party around a grand piano!
Details for both James Barbour’s “Holiday Concert” (12/6 and 7 – $25) and “Jim Caruso”˜s Cast Party” (12/8 and 9 – $20 and $35 for reserved seats)

WHERE: The Inner Circle at The Magic Castle, 700 Franklin Ave. in Hollywood

Those patrons who attend the cabaret as well as guest of the castle should be aware of the strict dress code, which requires coats/ties for gentlemen and dresses/pantsuits for ladies. Denim or tennis shoes are not allowed.