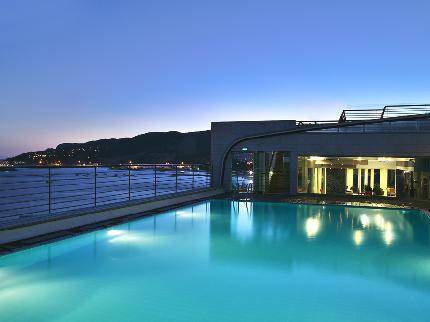 HOLLYWOOD—Welcome to a sapphire-blue oasis in the sweltering city, behind a mile-high chain-link fence, where whole families, children and adults splash and frolic. The shallow end of the pool is given to anarchic splashings, which defy the designation of swimming, and this purposeless horseplay and paddling are of course the best kind of swimming. On the hot cement perimeter, sun worshipers spread out their terry cloth towels and slather themselves with suntan lotion.

On crowded days, a teeming sea of half-naked humanity seethes under the watchful gaze of scowling lifeguards, their straw hats slightly smaller than Lichtenstein. They will bark when a rogue swimmer strays over the floating ropes and into the deep end, as children’s swimming lessons are going on. The youngsters are being schooled in the stuffy, formal kind of swimming quite useless at Cahuenga Beach. The shallowest part is so shallow you almost scrape your nose on the bottom, and it gets so crowded that you cannot swim three feet without colliding with a submerged shoulder or elbow.

Bystanders stop and gawk on sun-baked Cahuenga, put their hands up on the chain link and gaze wistfully. The ice-cream man stops pushing and stands beside his cart, his gaze befriended by the perfect incarnation of the Spirit of Summer, ears pierced by the soundtrack of squealing sun-browned children.

And from the clear, lapping waters, a swimmer, a frolicker, a practitioner of aquatic goofing off can contemplate, beyond Cahuenga Boulevard and the asterisks of palm trees, the white block letters of the Hollywood sign, floating in the bright haze to remind us where we are.

All the bodies glinting with water are not, thank heaven, Hollywood bodies. Some are sun-browned, nutmeg and cinnamon. Some are the pale color of ointment from lack of exposure to the sun: bodies in flush of youth, sunken-chested adipose middle age and bodies expansive with motherhood. If you haven’t been here, you don’t know what you’re missing. It’s our bargain-basement Puerto Vallarta, our South of France, our urban resort. And if you bring your Los Angeles City Library Card, it shaves a buck off the entry fee.

Cahuenga Beach operates in a rare window between the first day of summer and Labor Day. In winter the hibernating pool languishes cold and without people; the children’s squeals are a memory, and it’s sad and bleak as a seagull’s cry. The pool’s white flanks usually make it unscathed through December, and then the first spray-can Picasso jumps the fence and adds some black curlicues. Overnight the dark vines of spray paint accrue; the angled bottom of the pool becomes a convention ground for empty beer cans, bottles, plastic bags and muck.

Then the cycle begins anew. Renewal starts on the eve of summer: fresh latex obliterates the tangles of graffiti and a garden hose slowly fills the pool with clear blue reflective water. It is as thrilling as any of spring’s usual showing off. Not the thawing of ice or the budding of cherry trees moves me so. Anticipation of the pervading goof-off season at the cement beach comes like an elixir. Summer is always summer; the child within stirs.

Then the same blonde Russian lady will be back selling tickets. In the men’s changing room, a t-shirted man will reappear from wherever he disappeared to, and he will give you a numbered safety pin in return for a hanging bag of your shoes and clothes, which he will take care of while you take a dip in the pool. Summer is here. It’s summer. The contagious season contiguous to lazy bliss. And the squeals of children amplify. Summer is here. Even if you toil away at the 9 to 5, something easy infects the atmosphere, something precious and irresistible found in concentrated form here at Cahuenga Beach.

We are so worried about nuclear destruction, about the economy, about global warming, the extinction of wildlife and what have you. After an afternoon at Cahuenga Beach, if anything should roil my composure and pose a greater threat to the future of humanity, it is nothing but the bleak unimaginable prospect that the spirit of summer should ever perish from the earth.