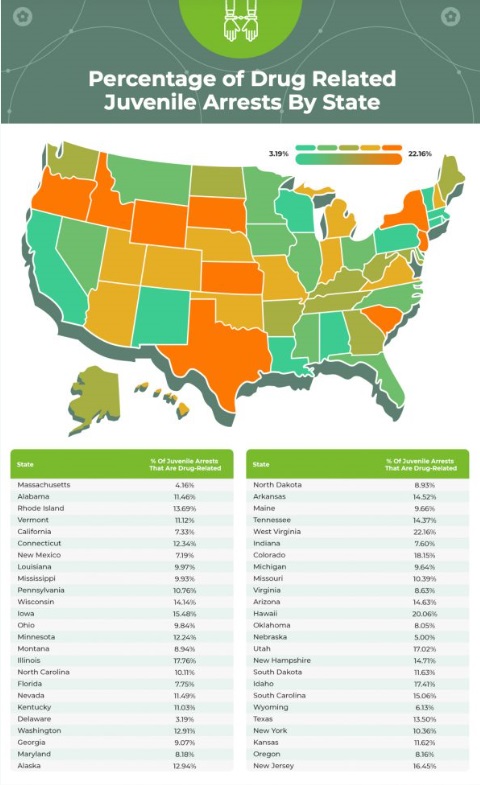 UNITED STATES—Unusual behavior: do you ever wonder what your kids are getting up to these days? Perhaps you detect a faint hint of a strange smell in their room… Or maybe you’re moving your teenager’s car in the driveway and pick up a funky smell that’s lingering in the air…

Suspecting that a child is abusing illegal substances is an unnerving experience. Parents might be suspicious about their teen’s stand-offish behavior but unless they are open about it, it can be extremely difficult to figure out what’s going on – and even more tricky to find out exactly which substances they might be abusing.

Juvenile drug use is a massive national issue – the harmful effects of these substances drastically impact young people’s lives each and every day. In the United States alone, out of a total of 689,249 arrests of people under the age of 18 in 2017, 11.54% were linked to drugs (based on 79,580 drug-related arrests)*. Rehabilitation treatment facility, GreenhouseTreatment.com analyzed FBI data to discover how juvenile drug arrests compare across the nation.

In The Golden State, it was found that 7.33% of all juvenile arrests (51,603) in 2017* were drug related. In fact, this was among the highest rates in the country. The study also found that California had a juvenile drug related arrest rate per 10,000 people (under the age of 18) of 4.04 – below the national average of 12.6. In 2017, there were a whopping 695 juvenile cases of general drunkenness arrests in California, whilst driving under the influence was the reason behind 455 arrests of people under the age of 18.

See how your state compares:

It was found that the state with the highest rate of drug related youth arrests was New Jersey at 22%, whilst Alabama had the lowest rate in the country – just 4% of all juvenile arrests were drug related.

Youth workers stress how important it is to keep a close eye on what children get up to in their free time. Parents should take note of any strange changes in social patterns – detecting drug abuse it in its early stages is key to recovery and avoiding a potential prison sentence. There are some tell-tale smells revealed by Rehabs.com to help identify different drugs:

A few years ago, the FBI decided to discontinue announcing the types of drugs juveniles were arrested for in their annual reports. This is unfortunate as different states across the nation face different challenges. For example, adults in Oklahoma tend to suffer from addiction to harder drugs like heroin, cocaine and opioids. It would be interesting to see how the youth arrests correspond given that substance abuse can begin at any age. Research has also shown that the younger people start using hard drugs, the more likely they are to become addicted later on in life.

*Based on latest data available.

‘It’s of vital importance that adults make an effort to monitor their children’s social and behavioral patterns in order to detect possible early signs of drug abuse ,’ says Ruchi Dhami, Director of Brand & Design at GreenhouseTreatment.com.‘This will help in effectively managing and treating substance addiction – the sooner the better. There are treatment facilities and programs available across the country, which can help young people to battle the harmful effects of drugs and effectively regain control over their lives. After all, they are the future of our country.’