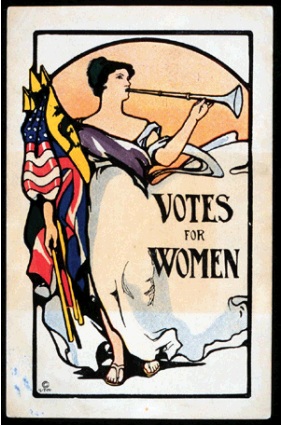 SACRAMENTO—For the 100th birthday of women’s suffrage, the California State Library and its Research Bureau have compiled a March calendar, which celebrates both Women’s History month and this statewide achievement.

The calendar features prominent female suffragettes, civil rights champions, legislators and elected officials, as well as original newspapers, postcards and other memorabilia that trace the success of the women’s rights movement. “Votes for Women” was produced and designed by John Cornelison and Carley Herron from the California Research Bureau, and is located on the California Library homepage at library.ca.gov.

One of the historical women spotlighted in the calendar is Clara Shortridge Foltz, who was the first woman to pass the bar in the United States, and who was a successful suffragist and practicing lawyer for 50 years.

Another important woman featured in the piece is Charlotta Bass, who published pro-suffrage editorials in the California Eagle, Los Angeles’ largest African American newspaper from 1912 until 1951.

Foltz and Bass are just two of the many historical women honored in this day-to-day calendar, and they serve as symbols of women’s suffrage during this month dedicated to their work.

California was the sixth state to give women the right to vote, with its eighth State Amendment on October 10, 1911, doubling the number of women with suffrage in the United States, according to the California State Library. California’s progression preceded the nation’s 19th Amendment, which allowed all American women to vote in 1920, making the Golden State a leader in civil rights.