BAKERSFIELD−On April 24, YouTube video  of two Bakersfield doctors, Dr. Dan Erickson, and Dr. Artin Massihi, who challenged the facts about mortality rates caused by COVID-19 and the decision to continue stay-at-home quarantine were removed from the website.

The doctors who have grown an audience on social media, with 90-minute press conference garnered over 5 million views. 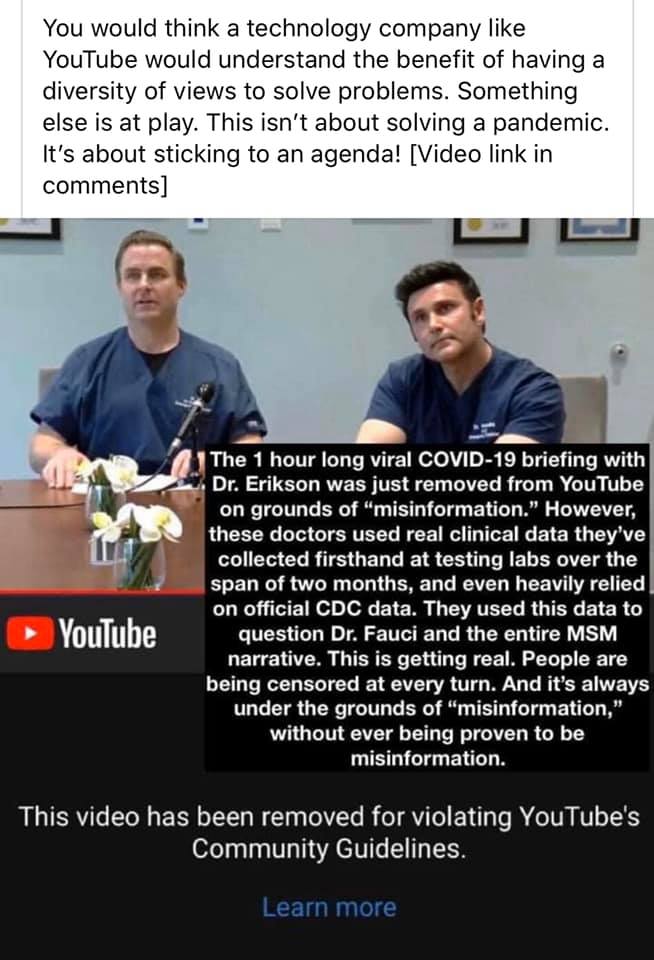 The doctors indicate they both have 20 years of experience in microbiology. Both Erickson and Massihi are co-owners of the Accelerated Urgent Care chain.

Some physicians disagreed with the doctors, calling the duo’s presentation “reckless,” with some citing the violation of The First Amendment.

The doctors explained in real numbers citing population totals against reported death tolls, while answering questions from a skeptical crowd.

Elon Musk, an aerospace manufacturer and founder of SpaceX in 2002 commented on the YouTube video via Twitter saying, “Docs Make Good Points.”

“YouTube and Google should not have the power to censor speech-particularly on critical issues of concern. The doctors’ views aren’t fraud. If YouTube disagrees, argue ON THE MERITS. Don’t abuse monopoly-and special congressional liability immunity-to become speech police.”

On social media sites, normal protocol is if an article is fact-checked and anything was incorrect, it would have a “Fake News” or “False Information” message on it. This video was not censured for misinformation. According to reports, YouTube cited, “community guidelines” as the reason the video was removed from its website.