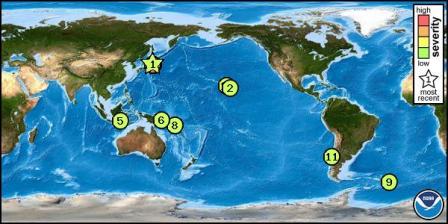 SACRAMENTO—Governor Jerry Brown declared Del Norte, Humboldt, San Mateo and Santa Cruz to be in a state of emergency on March 11, as a result of the tsunami and 8.9 magnitude earthquake off the coast of Japan.

The earthquake in Honsu created a tsunami, which generated a water surge on the California coast, damaging ports, harbors and infrastructure. Del Norte, Humboldt, San Mateo and Santa Cruz have all been flagged as danger zones for the effects of the tsunami.

Governor Brown has ordered evacuations in several areas, stating in a press release that “conditions of extreme peril to the safety of persons and property exist due to the tsunami and water surge impacting the counties of Del Norte, Humboldt, San Mateo, and Santa Cruz.”

California state government officials have been ordered to protect people, property and structures in these four counties, under the California Emergency Management Agency and the Sate Emergency Plan. Additionally, local government assistance has also been provided as part of the California Disaster Assistance Act.

Brown has asked that all residents of affected California areas abide by all warnings and regulations mandated by the California Emergency Management Agency.

The 8.9 magnitude earthquake occurred on March 11 around 2:45 p.m., killing over 10,000 people and displacing 200,000 because of destroyed homes and towns. Hundreds of people are still missing.