UNITED STATES—Two efforts have been created to recall California Governor Gavin Newsom from his position.  According to Ballotpedia, the first notice-of-intent-to-recall was submitted by Republican candidate of the 36th Congressional District, Erin Cruz on August 2, and has been approved.

Cruz cited the mismanagement of the state of California as the primary reason for her request. In order to move forward, Cruz is required to collect 1,495,709 signatures.

A Recall Newsom Facebook page has been set up with video footage that gives an explanation of the reason for the recall.

A Message for Gavin Newsom

We've got a message for Gavin Newsom… Your time is up.#RecallNewsom petitions available soon. Join the campaign at https://recallnewsom.us

Here are our Top 5 Reasons to #RecallNewsom. What are yours? Please share this video and make sure you're registered to download a petition when they become available at the end of next week.https://recallnewsom.us/download-a-petition/ #RecallNewsom #RecallGavinNewsom #NewsomRecall #GavinGon4

On September 10,  Dr. Ben Carson was interviewed by Laura Ingraham of Fox News to discuss President Trump’s push to renew Urban America. While speaking about homelessness in various regions, Dr. Carson called California the Poster Child for that. “The President is very passionate about doing something about the homeless crisis,” said Dr. Carson.

Ingraham replied, “There is already $1.75 in their budget. Are you really going to pour more money into this.”

Governor Newsom has a two-year-old video on his Facebook page, noting his accomplishment of getting the same-sex marriage law passed while he served as Mayor of San Francisco.  Newsom recently executed an executive order regarding vaping and e-cigarettes and announced his plans to launch a state-sponsored public awareness campaign after reports of lung damage caused by vaping. 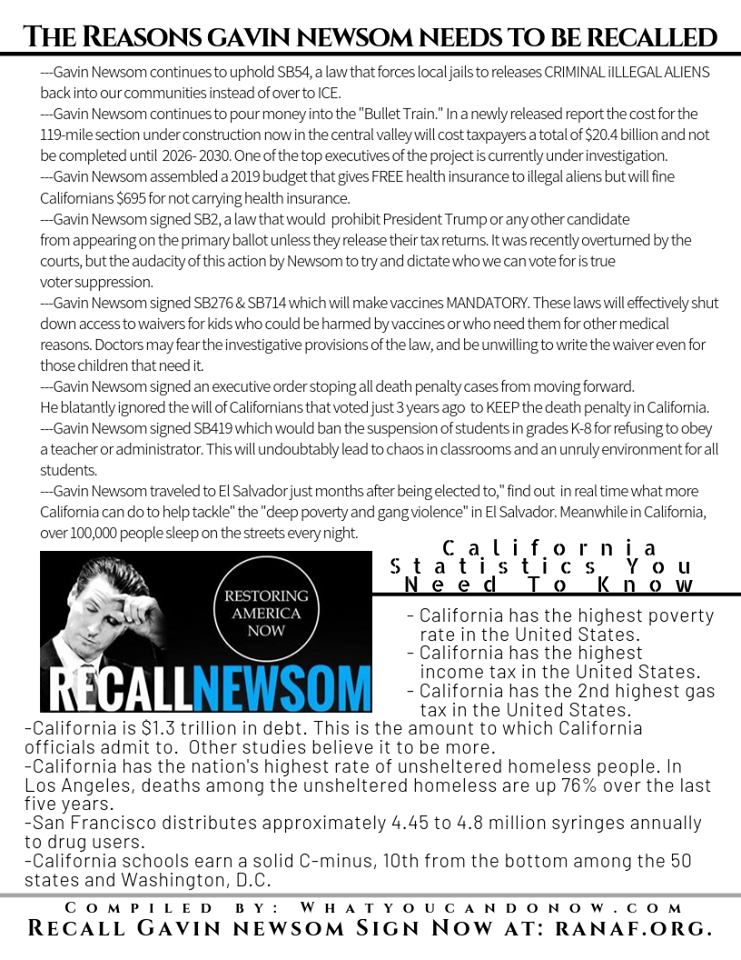 The Recall Newsom website has 31,518 members noting they had a desire to see California survive stating:

“Newsom wants your guns, open borders, and to raise your taxes.  This is not healthy or safe for California residents.”

Act.reformcalifornia.org is another group contemplating submitting its own intent to recall Governor Newsom. Some raising concerns about the recent arrest of an illegal alien who was responsible for the rape of a 5-year-old girl in Indio, CA several times.

In a letter, Governor Newsom responded to the efforts to have him recalled saying it was unwarranted. 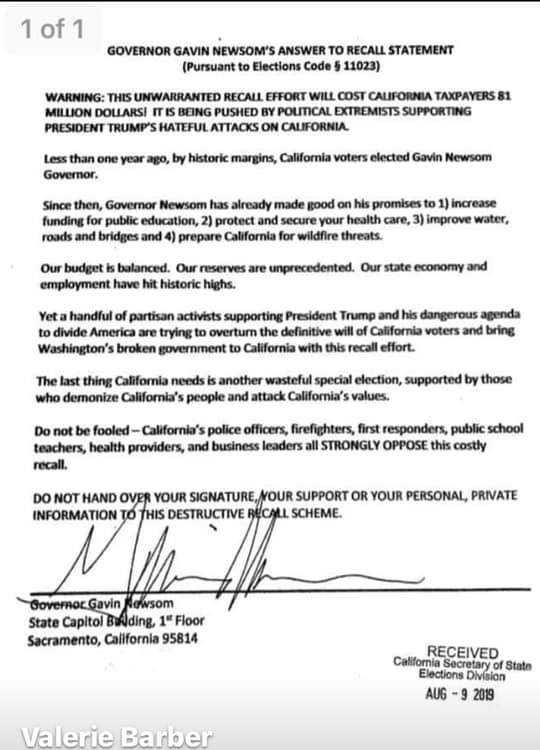