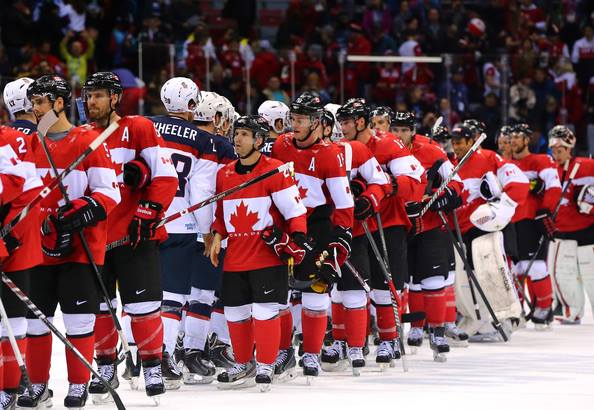 SOCHI, RUSSIA—In what was to be a game of pure toughness turned into a one sided race. The Canadians gave the U.S. men little room to work with on the ice, to shut them out 1-0 at Bolshoi Ice Arena Friday night. Jamie Benn was credited with his country’s lone goal leading them to their second consecutive gold medal final and their 13th appearance since the birth of the winter Olympics.

After watching the U.S. women fall to Canada 24 hours ago, the men needed to make a statement for their country as their archrivals stood in their way of facing Sweden for the gold. The majority of Canada’s squad from the 2010 Olympics remained with Sydney Crosby as Captain to the team once more.

The game got underway with Canada controlling the puck right off the opening faceoff trying to set up a play to move into Team USA’s end. The hesitation set up the US as they took chances on goaltender Carey Price where Phil Kessel took a shot on the glove side of the net with no luck. “I just tried to take as much net as possible to stop him,” said Price.

Canada then took the game to USA netminder Jonathan Quick, with Jeff Carter going after his Los Angeles teammate breaking through the American defense, but not through Quick. It was clear that the goaltenders would determine the break of a scoreless tie as the pace began to even up forecasting a tough game. At the end of 20 minutes, Canada outshot the US16-11 with both trading a power play each that went unanswered. Canadatook 10 scoring chances to USA’s seven, but would make their numbers count in the next period.

Not more than a hundred ticks into the second saw Canada taking the lead on a brilliant pass play from Jamie Benn where he tallied his country’s first goal of the game. On a play near the glove side of Quick, Benn cleared the puck back to teammate Jay Bouwmeester near the blue line where he shot on net was deflected by Benn in the crease to give the forward his second goal of the tournament. The goal became a slow deflating moment for Team USA as they lost morale and poise to attack on the pair of power plays in the period with little action to form in the offensive zone. Despite the one goal margin the Americans held on to take 11 shots on Price while Canada settled with 12.

The Canadians were 20 minutes from the gold against Sweden, but time was still available for the United States to make it a game. The Americans battle for offense was their biggest obstacle as Canada’s defense was at their all time best of the tournament to date. Price remained solid from start to finish as he made 31 saves. Their dominance of the United States left no need for the country’s best scorers to rack up the score any further.

“We were just playing hard and when need saves our goaltender made them,” said Ryan Getzlaf. Crosby has yet to score a single goal in the tournament since his OT game winner in 2010, but their one goal lead held up for the final horn to sound.

Canada outshot the United States 37-31, with Quick putting on a tremendous performance in the four games he faced. His 36 saves were enough to call it tough goaltending in his Olympic debut, but the loss still hurt the team.

“We had trouble sustaining pressure on their end; they outnumbered us in their zone and quick on transition,” said Ryan Callahan. “We wanted to get some pucks behind their d to create opportunities that way but they defended well,” he added. Their consolation game would be for the bronze medal meeting Finland on the ice Saturday night.