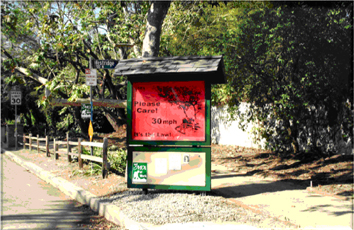 BRENTWOOD—On Tuesday, January 3, the Los Angeles City Council voted to direct the Bureau of Street Services to not reinstall speed humps on Mandeville Canyon Road, the sole street in and out of the canyon, that were paved over within the last six years. This signals the end to a longstanding dispute between residents of upper and lower Mandeville Canyon over the humps’ utility.

One hump was located between Oakmont Drive and Boca de Canon Lane, and the other between Boca de Canon and Kimberly Lane. They were built by the city about 10 years ago at the bequest of residents living in lower portions of the canyon who were concerned about drivers speeding through the area. Upper canyon residents claimed speeding was not an issue on the five-mile road, and that the humps would impede emergency vehicles from entering the neighborhood during fires. Honking in protest of these humps was met by vehicle and physical altercations.

The motion was introduced in November by Councilmember Bill Rosendahl, who represents Brentwood as part of the Los Angeles’s 11th District, and seconded by Third District Councilmember Dennis Zine. On December 7, the Los Angeles Public Works Committee approved the motion for consent by the L.A. City Council.

Anyone who voted for the motion can ask for it to be reconsidered at the next regular council meeting if eight members in total agree.