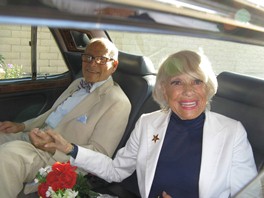 HOLLYWOOD—Two weeks ago officials in Palm Springs declared October 2, Carol Channing Day, as three-time Tony award and Golden Globe award-winner received a star on the Palm Springs Walk of Stars on Saturday, in front of the Azul restaurant and Georgies Alibi. The Star is an acknowledgment of Ms. Channing’s accomplishments on Broadway, in movies, on television and as a humanitarian. “I always knew you’d have people walking all over you,” read a message from comedian and friend, Rip Taylor.

The hour long star installation ceremony attracted over 100 fans, including local dignitaries and fellow stars like Trini Lopez, Frankie Randall, Margaret O’Brien, Harlan Boll and recording artist NIGEL, who crowded a portion of Palm Canyon Drive, reportedly making the event one of the most well-attended star installations of all time, officials declared. “When I heard she was getting this star, and it’s long overdue – I certainly had to be here because she’s a dear friend and a wonderful, wonderful person,” said O’Brien, an actress who may have been best known for her Academy Award-winning role of Tootie in “Meet Me in St. Louis” opposite Judy Garland.

As an ovarian cancer survivor, Channing was presented with a certificate of recognition from LIVESTRONG, which is part of the Lance Armstrong Foundation to support cancer survivors and find a cure. Congratulatory messages, sent from Channing’s colleagues who were unable to attend the ceremony, included Palm Springs resident Barry Manilow who sent a huge bouquet of flowers and a note that read “”¦As far as I’m concerned, you should have a star on every street in town.” Actress Florence Henderson, who couldn’t make it because of her rehearsals on season 11’s “Dancing with the Stars,” was rumored to be dedicating a step to Channing on Monday’s show. Channing and her husband, Harry Kullijian, took the opportunity to talk about their efforts to bring the arts back into public schools through their foundation (ChanningArts.org). “We aren’t trying to save the arts,” remarked Carol, “We are trying to help the arts, [to] save our children.” Channing and her husband have been working on a current resolution authored by Rep Jackie Speier, which recently passed the House and is being presented to the Senate in September.

“Arts are so important to the human soul,” Kullijian said. “And this lady is leading the march,” referring to Carol. Channing even performed “The Show Must Go On,” belting out lyrics to underscore her mission. “The arts must keep their place in education,” Channing sang. “The show must go on, the children count on us.”

Attending the festivities was Tony Award-winning Producer/Director Ms. Berinstein, whose work includes the award winning documentaries “ShowBusiness: The Road to Broadway” and “Gotta Dance.” Ms. Berinstein has selected the life and career of Carol Channing as her next project with Ms. Channing’s approval. So far interviews have been conducted with friends and colleagues such as Lily Tomlin, Phyllis Diller, Jerry Herman, Sam Harris, Bruce Vilanch, JoAnne Worley, Barbara Walters, Tyne Daly, Chita Rivera, Debbie Reynolds, Tommy Tune and many others.

What is on the horizon? Having just released a new CD, “For Heaven Sake,” which includes many of the songs she came to know and love as a child with spirituals that she learned from her father. Carol is proudly preparing to release a new Patriotic CD tentatively titled “Carol Channing: True to the Red, White & Blue” that features songs such as “Over There,” “Dear Old Glory,” “God Bless America,” “America” and the “Battle Hymn of the Republic,” among others. Proceeds from the sales will go towards the foundation’s efforts.

Photographs Courtesy: Bob Fennell
DISCLAIMER: This article was a contribution made by an outside agency or person. The content has not been verified by Canyon News. Please exercise your due diligence prior to relying on this article for factual information. Canyon News is not responsible for the views, words, and opinions of contributors.