UNITED STATES—Carolyn Maloney, Democratic Congresswoman for the 12th District in New York is reportedly taking the seat as acting Chairwoman of the House Oversight and Reform Committee, after the unexpected death of Chairman Elijah Cummings on Thursday, October 17 at the age of 68. 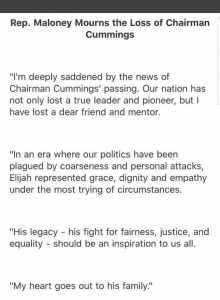 According to her website, Maloney introduced approximately three dozen bills this year. The H.R. 1327 Never Forget bill was passed, which is a fund set up for fallen heroes of 9/11.

The Congresswomen will temporarily take the seat on the panel for the House Oversight and Reform Committe for the Impeachment Inquiry. Others on the panel include House Intelligence Chairman Adam Schiff (D-CA) and House of Foreign Affairs Chairman Eliot Engel (D-NY).

The Chairman of the House Judiciary Committee is Jerrold Nadler (D-NY). Nadler decides if articles of impeachment will be brought against President Donald Trump.

A permanent replacement will be elected by a Democratic Caucus at a later date.