INDIO-YEE HAW! Over 70,000 fans packed the Empire Polo Grounds in Indio for the rip roaring Stagecoach Festival, California’s Country Music Festival, returned with a thrilling three day event from April 29-May 1. After a 2-year hiatus Stagecoach returned with an incredible weekend of music and entertainment,

Before we go any further mentioning the incredible performances; the delicious aroma of food being served at Guy’s Stagecoach Smokehouse courtesy of celebrity chef Guy Fieri, or the late night carousing at the Honky Tonk Dance Hall, Stagecoach 2022 belonged to Carrie Underwood.

Underwood owned Saturday night, the Country megastar delivered a career defining set on the Mane stage which was brilliant in every facet from the moment the lights went pitch black opening her set.

Her soaring vocals trounced the gusting winds for two hours, her costumes were immaculate, than the concert transformed into an historic moment in the history of Rock in a flash when Guns N’ Roses frontman Axl Rose surprised the crowd joining Carrie onstage for two GnR classics, “Sweet Child O’ Mine,” and “Paradise City.”

Two legends sharing the stage sent the crowd into pandemonium, Underwood proclaiming,”this is the greatest night of my life!” 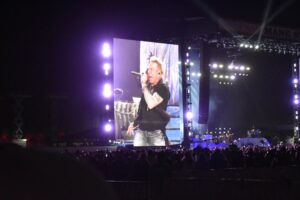 She dazzled the crowd with her powerhouse voice, belting out one hit after another and fireworks to boot. Highlights included “Last Name,” “Church Bells,” closing out night two with a stupendous performance of “Before He Cheats.”

On Friday, the first Stagecoach since 2019 opened with strong sets by Maren Morris and headliner Thomas Rhett. This being Rhett’s first time headlining the iconic festival, he pulled out all the stops and turned the Polo Grounds into a frat party. It was a gigantic production from the singer, surrounded by smoke and lasers, and he got everyone singing the Garth Brooks classic, “Friends in Low Places” with help from country singer Hardy and actor Ashton Kutcher who joined Rhett onstage.

Similar to Coachella, Stagecoach had numerous cameos and guest stars that one wouldn’t traditionally associate with performers who fit the peramaters of country music, and that is a wonderful aspect of Stagecoach. Separating it from other festivals across the nation.

Besides Axl belting out the high notes with Carrie, DJ Diplo splicing EDM with country had late night partiers dancing at the Palomino stage. In addition, the Beach Boys’ Mike Love helped Locash sing a pair of the bands greatest songs.

Canyon News had the privilege of speaking with country music star Lindsay Ell after her terrific Sunday afternoon set. She was joined by Cheat Codes for the song “How Do You Love”, and she playfully cooled off the crowd with a giant green super soaker which matched her outfit perfectly. We asked her about her latest single ” Right On Time” and this was her answer.

“So my friends were having all these life-changing events, like getting married and having children. It made me realize that everyone has to make their own decisions in their own time,” adding, “you have to do what’s right for you, and not live up to other people’s expectations of you.”

With its triumphant return to outdoor live concerts, the country music crowds are counting the days until Stagecoach 2023.