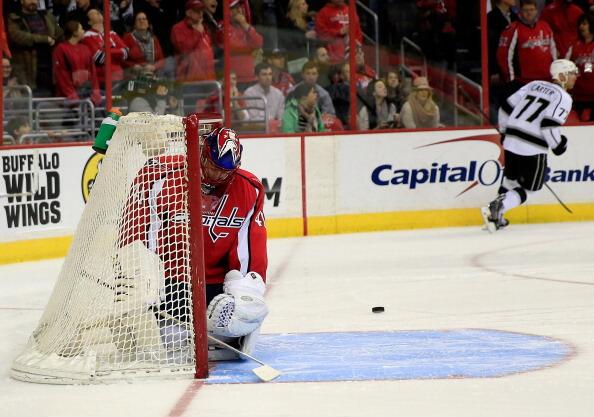 WASHINGTON – A late scare from Washington in regulation led to a huge victory in a shootout for the Kings. Anze Kopitar and Jeff Carter scored back to back points with Quick shutting out the Capitals in a shootout to win 5-4 at Verizon Wireless Center. The loss puts Washington in a four-way tie for two spots in the Eastern Conference wild card, while the Kings gain a five-point lead from Minnesota in the Western Conference.

After beating the Caps at home in a shootout, the Kings great start to a short road trip stopped in the nation’s capital to finish a second meeting between the two teams. Alexander Ovechkin and his
Washington mates have 10 games left on their schedule in a fight for their lives where the race for the wild card is too close to call. Getting out ahead of Los Angeles was the order of the night and the team’s captain would follow it.

In the first two minutes of the opening period, Ovechkin pulled off a shot from the side of the rink on Jonathan Quick’s right side that deflected off Kings’ defenseman Robin Regehr near the crease to take a 1-0 lead. The team’s best scorer wasn’t done as he added his second of the night on a snap shot that beat the Kings goaltender on the stick side once more to give him 48 goals this year. The Capitals two power play goals showed a huge weakness in the Kings’ penalty kill, as they shot a combined eight shots through 20 minutes of play holding Los Angeles to seven.

The Kings power play came together to cut Washington’s lead in half on Mike Richards scoring on a
Martinez one timer rebound giving him his 11th of the season. During a four on four situation the Kings nearly tied it with Washington showing vulnerable moments in front of their goaltender Jaroslav Halak. Their two shots were stopped by the quick movements of the Slovakian as he fought to keep Washington’s lead alive. The reward came at 17:18 on a two-man play with Chris Brown firing off the blocker of Quick for Dustin Penner for score giving him 14 goals. The Kings took control of the second, but with two wasted power plays through 40 minutes, more would have to come from their even strength play in the third.

Los Angeles third line came together in order to make that possible with Dwight King scoring on Captain Dustin Brown’s drive off Halak to give Washington a smaller hold on the game. Marian Gaborik scored their second of the period where Tyler Toffoli sent a pass from behind the Capitals net for Gaborik’s snap shot adding his ninth. Brown gained his second point on a goal that was given full credit to himself as the Kings countered on a Washington turnover for Brown to score through traffic notching his 14th.

The game stayed in the hands of Los Angeles where gaining a full two points would improve their hopes for a strong playoff position and inevitably ruin the other’s. The Capitals didn’t share their sentiments as they made a miraculous fight while shorthanded to bring the game into the Kings end in the final minute of play. Their fight for the puck worked as it was sent out front where a tap from Ovechkin sent the puck crawling through the five hole of Quick where Evgeny Kuznetsov scored the tying goal that saved the game and forced overtime. The Capitals 10 shots on Quick were the most desperate as one made the big difference giving them more time for the upset.

It didn’t come in the five minute period as the Capitals took two good shots on net that went off the leg pads of Quick leaving neither team with an opportunity to score while four apiece. A shootout became necessary and both the Capitals and Kings had shooters to be weary of. Quick wasn’t fazed as he made a stop of Kuznetsov when it mattered denying him the chance for a second puck behind his legs. Kopitar made it 1-0, on a backhander through Halak’s legs leaving Eric Fehr to give his team life. He failed on a charge that came up short giving Carter the opportunity to close it out.

Carter’s forehand shot went over the side of Halak to end the game holding the teams’ four-game winning streak. It clearly was a game of two desperate teams at a time where losing couldn’t be accepted. On eight combined goals the match was won, but not lost by both. Washington made a serious problem for the Red Wings, Blue Jackets and Maple Leafs as the three teams are with 80 points with only two spots available for the wild card.

As the Capitals think on this situation, the Kings will finish out the Mid-Atlantic road trip with a match against the Pittsburgh Penguins on Friday night.