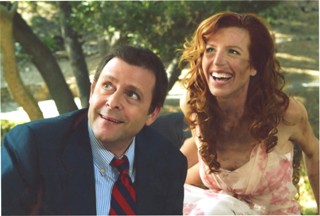 SANTA MONICA—Actress Tanna Frederick may take a limo every morning from Santa Monica to a Topanga Canyon location, but she has a good reason for it. The beautiful redhead is now filming a movie that she and the cast won kudos for at the Edgemar Theatre over the past year. The award-winning Henry Jaglom play “Just 45 Minutes From Broadway” is now being put on film and it is rumored to be another spectacular Jaglom picture.

Frederick also is gearing up for the upcoming “Queen of the Lot,” in which I had the honor of working with her, and she’s continuing her hard work to help clean up our oceans and waterways throughout the U.S. I caught up with the beauty on a recent jaunt to the valley, and had the opportunity to ask her all of the questions her fans want answers to.

Q-How is the character of Panda different from other roles you’ve played over the years?

A-“Her ambitions are more stepped upon. The other characters I’ve played have always had an inner gleam of hope that things would work out, inevitably, things would work out, but Panda has had it and is disillusioned. She’s thrown in the towel and operating from pure defeat. Also, I love being able to play within a big unapologetic dysfunctional family. Every family is of course dysfunctional, but they revel in their dysfunctions. In this role, I get to have 14 aunts and uncles, and inside our family we can dig at each other all we want, but if you’re an outsider, and you come in and mess with any of us and our dysfunctions, forget it! We are on you like a heard of elephants and you’ll get trampled.”

Q-Adding Judd Nelson to your roster of leading men is exciting. What character does he play in “Just 45 Minutes From Broadway” the movie and how do you like working with him?

A-“He is wonderful, he’s certainly a master of the work. He is lovely to work with, extremely thoughtful and attentive and inquisitive during the process, and I’ve learned so much from his detail with the work. He is so much fun to work with because he is like a little kid, so excited. Judd is playing my sister’s boyfriend Jimmy, who becomes Panda’s boyfriend.”

Q-What is the latest on your PSOS work?

A-“We’re getting ready for our annual gala ”˜Actors for Oceans,’ coming up on October 23, at the Falcon in West Hollywood with Shaun Tomson and PT Townend. We’re even serving a Tomson Tube-tini and PT Pink Cocktail, in honor of my heroes and PSOS co-founders. It’s going to be fun! Tony award-nominee Sam Trammel is jumping in to play a session with Keaton Simon. And we’re raising money for MAUI OLA Foundation, an organization that brings children with CF out to the coast to surf in the ocean to give them a natural healing experience. The amount of the saline and the saltwater gives them a boost to break down congestion in their lungs and gives them the experience of a beneficial athletic experience. It has changed their lives forever.

“We’re presenting our checks from Surf 24 to Surfrider, Heal the Bay and Inside the Outdoors, and giving PSOS Awards to new board members John Slattery, Sam Trammel and Tate Donovan. Also, we’re going to have sign up sheets, gearing up for next year’s PSOS 2011.”

Q-How excited are you for our upcoming “Queen of the Lot” to be released on November 18, in Hollywood?

A-“Thrilled! I really love the film. I love dealing with the subject matter from addiction to substances, to love, to money, to fame. And it’s very relevant to issues happening right now (obviously). My character is under house arrest and been arrested for driving loaded twice, and she’s looking to deal with that dark space that is stuck in a person’s psyche that triggers the addictions. She needs to escape her life, so she needs to deal with why she’s not satisfied when everything she’s always wanted and now finally has it all in her life.

“But more than that it’s a fantastic love story, a messy love story, and I’m a sucker for an imperfect love story. So it is material I love. Noah Wyle is brilliant in the film and a brilliant romantic leading man. He’s got a lot of substance as an actor, he’s a rock, and he’s a gentleman, in that old Hollywood way, but with the attitude of a late night talk show host (and I mean that in the best way). The combo is some great science experience blasting its way onto film.”