UNITED STATES—Catholic churches across the nation have been burned and vandalized in the past month with the largest amount of vandalism occurring during the July 11 weekend. The vandalism of churches began with riots following the death of George Floyd in Minneapolis, Minnesota on May 25.

The San Gabriel Mission Church in San Gabriel, California caught fire on Saturday, July 11. The cause of the fire in the 249-year-old church is still under investigation. According to reports, the recent upsurge in vandalism and monuments will be considered in the investigation.

In a Skype interview EWTN had with Archbishop of San Francisco, the Archbishop denounced the destruction of statues in the name of racial injustice. Video footage shows people cheering as the statue of San Junipero Serra toppled to the ground in Golden Gate Park at the hands of protesters on June 19. San Junipero Serra was the patron Saint of Native Americans and led missions for the protection of Native Americans.

According to Marion County Sheriff’s Office in Florida, on July 11, parishioners were in the church preparing for mass when suspect Steven Anthony Shields, 24, drove his vehicle into Queen of Peace Catholic Church located on 6455 State Rd. 200 in Ocala.

Shields poured gasoline in the foyer and lit it before leaving in his vehicle. Deputy Josue Gonzalez gave chase to Shields and took him into custody. All of the parishioners were able to get out of the church safely. Shields was charged with attempted murder among other charges. 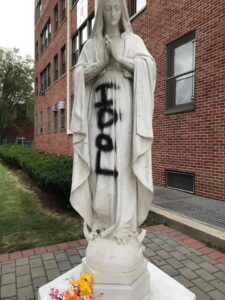 On July 10, a one-hundred-year-old statue at the Cathedral Prep School and Seminary in Elmhurst, Queens, New York had the word “IDOL” spray-painted on it during one of the many riots following the death of Floyd. The statue has been restored.

The Cathedral of the Immaculate Conception in Denver, Colorado had the words, “pedofile,” “God is dead” and “There is no God” spray-painted on the Church steps and rectory. Vandals repeatedly struck the Cathedral over the weekend.

On July 11, the statue of Mary, the mother of Jesus, was found decapitated at St. Stephen’s Church in Chattanooga, Tennessee. According to reports, the head of Mary was never found. Bishop Strika of the Knoxville, Tennessee Diocese tweeted, “What a strange time [we live in].”

You Know You Can Sell Life Insurance You No Longer Need