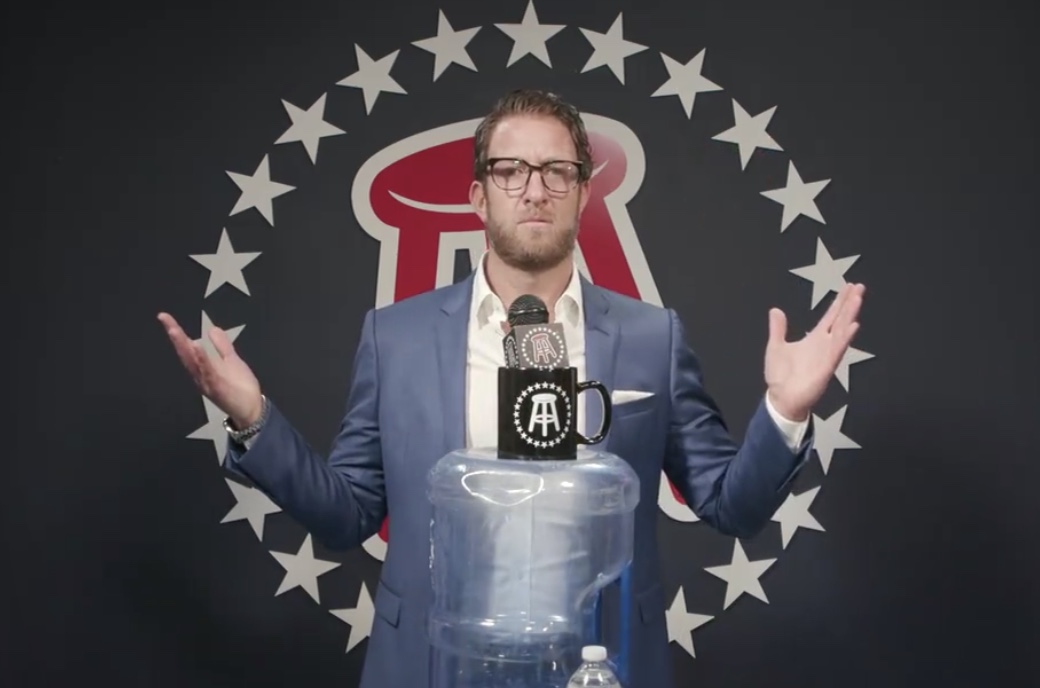 NEW YORK – CEO of Barstool Sports, Dave Portnoy, 44, has been the headline of a Business Insider article alluding to sexual misconduct with women that claim to have felt “humiliated” after having “rough” sex with him.

Portnoy spent about an hour on his Instagram live stream November 11 to explain his side of the stories showing exhibits of multiple text chains and pictures with the “victims” before and after their sexual encounters.

Business Insider journalist, Julia Black is the author of the article that Portnoy called a “hit piece” that would lead readers to believe that he is a “rapist.”

The headline of the article reads, “I was literally screaming in pain’: Young women say they met Barstool Sports founder Dave Portnoy for sex and it turned violent and humiliating.” To continue reading the rest of the article, Business Insider gives you the option to pay a one-dollar trial and then twelve dollars monthly following your trial.

Black identified three women in her article that Portnoy directly addressed during his live stream. Black never accused Portnoy of rape in the article. She explains that the alleged victims of Portnoy were “running away” from him and it was mentioned that he videotaped the girls during sex without their consent.

Portnoy made a statement at the top of his live, “I don’t care how many times a girl says yes, yes, yes before – if at any point, she’s like ‘no’ and you don’t stop, that’s rape.”

Olivia, who was mentioned in the Business Insider article admits trying to get Portnoy’s attention but was unsuccessful, so she used her sister, Allison who was 19 at the time to “bait” Portnoy into getting a response via direct message on Instagram.

Portnoy said that he found Allison “attractive,” so he responded. She recalls going to Portnoy’s house and sitting by the pool. The two went inside after Portnoy offered her watermelon and says they started kissing. Allison told Business Insider that Portnoy “kept spitting in her mouth” which Portnoy denied calling it a “bold faced lie.”

According to Business Insider, Allison claims to have felt “stressed and overwhelmed following her sexual encounter with Portnoy” and three nights following her meeting with Portnoy she was “suicidal and hospitalized.” Allison’s mother wanted police to be stationed outside of his house in Nantucket to witness “young girls being dropped off” but Allison did not want to pursue legal action against Portnoy despite her mother’s request.

Portnoy informed his viewers that Nantucket police spokesman Lt. Angus MacVicar told NBC News that the department did not receive a phone call from Allison’s mother, did not speak to Black and was not investigating Portnoy but there was a report made by the mother submitted by a different researcher (not Black) that was given to NBC News. The mother wanted the police to be aware of Portnoy’s “bad behavior” and claimed that she, “heard he only hangs out with 18-year-old girls while he’s in Nantucket.” The police officer told the mother that they have not had any complaints about Portnoy on record. The report was filed August 10. Portnoy ended contact with her daughter August 2.

Portnoy denies the claim that young girls are dropped off at his home stating, “I barley have people over my house.” He debunks the claim that she is “in shock” and could “barley speak” when he reveals their direct message exchanges within forty-eight hours of their meeting.

He shows screenshots of his conversation with Allison on Instagram direct messages from before and after their meeting. She tells Portnoy before they meet, “I’m on island with all my friends and really want to see you. Would do anything.” After Portnoy rejects her invite to meet at Nantucket bar, Cisco’s she reached out to him again the next day. After Portnoy told her he was “free during day” she said, “okay can we bang” Portnoy responded, “yes.” The following day Portnoy asked her, “are you excited or nervous haha” When she says, “both” Portnoy replied with, “hahah. Don’t be. It’ll be fun. And if you don’t wanna do anything we won’t.” Portnoy also pointed out that Business Insider had access to Allison’s direct messages.

Following the hookup, Allison and Portnoy had further exchanges that were shown during his live. Allison told Portnoy she “got the word around” about their sex, and that she was “in shock” that Portnoy was still messaging her following up with giving him her phone number.

Madison was another alleged victim of the scandal named in the article who told Portnoy she had a “rape fantasy” prior to their meeting.

Portnoy said she flew out to see him, and the reason she slept on the couch the following two nights are because the two “did not get along.” During an eleven-minute rant a couple hours after the article dropped, Portnoy claimed, “at no point was it not one hundred percent consensual” and “at no point did she ask me to stop.”

Portnoy admits there is no tangible proof like the direct messages he has with Allison to disprove the allegations from Madison. He called it “a game of he said she said” and explained that their political views were different and she was “very extreme.”

Although Portnoy kept the faces of the girls anonymous, Madison came forward on TikTok, dueting a video with Portnoy talking about the article and commented in response to a user who said, “Dave not a rapist that’s crazy. When you got money u got to be careful.” She replied to the comment stating, “nobody said he was a rapist”

Another user commented, “she messaged him…said she wanted to explore her rape fantasy. She came over.. they did. She is of age, she never said no..sounds consensual to me.” Madison replied to that comment stating, “The article never said the sex wasn’t consensual” Portnoy denied that they ever explored that fantasy.

Madison had a “finsta” account, also known as a fake Instagram account that she shared with an individual that Portnoy identified as “Stoolie.” He claimed that he screen recorded Madison’s story when she was at Portnoy’s house in Nantucket and when he realized the story was about his peer, he sent Barstool the video.

On her finsta account she posted a selfie with a caption that read, “Portnoy was a dick and lame and grumpy. He gets a 2/10 from me. If he ever pisses me off I have lots of content to expose him with. I am going to stick to the athletes”

The third girl mentioned was a woman named Ava Louise who spoke to Portnoy in 2017. He said that they met at a bar in New York and “never spoke again.” Portnoy showed his listeners a clip of Louise on the Doctor Phil Show where she was upset that the coronavirus was getting more attention than a song she had out that was “going viral.”

Business Insider correspondent, Patrick Coffee reached out to Barstool Advertisers after publishing the article asking if they were “aware of this recent story about the company’s founder” and if they had, have there “been any discussions regarding those partnerships.”