RIVERSIDE—On November 25, at approximately 11 a.m., the Riverside Police Department and Riverside Fire Department answered a welfare check call for a teenage girl in the La Sierra neighborhood. She was visibly upset while she got in the car with a man in a red Kia Soul. 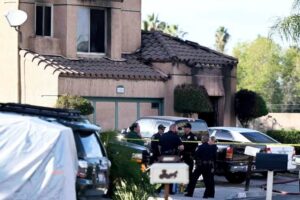 Upon arriving at the home, authorities found both grandparents and the mother of the teen unresponsive. The first floor of the home was on fire which were later extinguished by firefighters.

First responders removed the bodies from the home and announced all three were dead, and that they were murdered.

According to Riverside Police Department, the teenage girl was being pursued online by the suspect, Austin Lee Edwards, 28, from Chesterfield, Virginia in an online dating scheme referred to as ‘Catfishing.’ That is when the person pretends to be someone else.

Virginia State Police were in pursuit of Edwards who had crossed state lines to meet the teen.

Authorities indicated that Edwards had gotten all of the teen’s personal information from her and drove from Virginia to her home parking in a neighboring driveway. He killed the three adults inside, then returned to the car with the teen and drove away.

Authorities were able to track the vehicle to San Bernardino County.  According to the press release, both Sheriff’s Aviation and California Highway Patrol’s Aviation followed the vehicle until Sheriff’s Specialized Enforcement Division (SWAT) could catch up. The vehicle traveled south on Highway 247, then east on Highway 62, coming to an end on Kelso Cima Road.

A police officer from Virginia was shot and killed during a police chase that turned into a shoot-out, between the suspect, SWAT officers, and San Bernardino Sheriff’s deputies.  According to authorities, Edwards previously worked for the Virginia State Police until his recent employment for the Washington County Sheriff’s Department in Abington, Virginia.

The suspect exited the vehicle and pointed his gun at the hovering helicopter from the sheriff’s department and deputies opened fire.  As officers approached the vehicle, the Edwards was unresponsive and declared dead at the scene.

SWAT officers who intercepted the police chase were able to rescue the teen who was not physically harmed.

The teen was placed in protective custody of Riverside County Social Services.