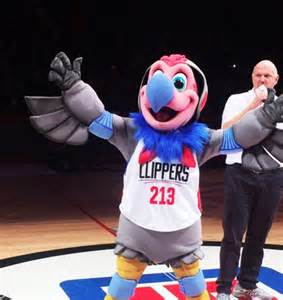 LOS ANGELES—On Monday, February 29, during halftime of the Los Angeles Clippers/Brooklyn Nets game, a fine feathered friend flew to center court. The Clippers new mascot, Chuck the Condor, made his debut with a riot of colors. Pink face, blue beak, silver wings and of course, a pair of red “Chuck” Taylor Converse shoes, for which he is named after.

Will this new addition who wears the number 213 (the Los Angeles area code) jersey, surge the Clippers to a NBA title run? So far so good, as they have won both games, including a stunning come from behind victory over the Oklahoma City Thunder 103-98 last night at the Staples Center.

This season has seen a transformation of the Clippers organization. Chuck was introduced by new owner, Steve Ballmer, who dazzled the crowd by amazingly dunking the ball off a trampoline. Since becoming the owner on August 12, 2014. Ballmer breaks the mold of what we think of NBA owners. Rather than sitting in a stuffy luxury suite, he sits in the stands. Where his cheers and dancing might remind you of YOUR dad.

LA sports fans are notoriously cynical, unfortunately, some fans wish Chuck the Condor would go the way of the Dodo.

I feel Clipper nation is being too harsh on Chuck. Soaring around Staples Center, Chuck engages the fans, particularly the children who already seem to love him. Isnt that what its all about? Having fun.