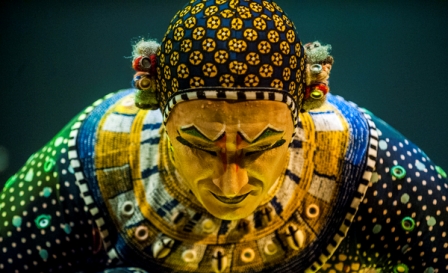 SANTA MONICA—Cirque Du Soleil took to the streets of the Santa Monica Pier on February 6 to offer the public a preview of their latest installation TOTEM. The free event was a way for the performers to give back to the community while returning to the place where they began nearly 30 years ago ”â€œ the street.

The performance took place between Broadway and Santa Monica Blvd. at 12:30 p.m. at the Third Street Promenade. Red Bull’s BMX and break-dancers joined the Cirque entertainers, as their performance showcased their artistic grandeur while tapping into the energy of street performance.

TOTEM is written and directed by the multidisciplinary talent of Robert Lepage whose work is “lauded by critics the world over [and] whose modern and unusual work transcends all boundaries,”Â says the creator’s biography page on Cirque’s website.

The storyline of TOTEM follows the journey of the human species from its original amphibian state to its ultimate desire to fly. Through visuals and acrobatics the show takes audiences through the evolutionary process of our species.

“The word ‘totem’ suggests that human beings carry in their bodies the full potential of all living species, even the Thunderbird’s desire to fly to the top of the totem,”Â says Lepage.

The show explores the relationship that bonds Man to other species, his dreams and his infinite potential, says Cirque’s website.

The cast includes 46 acrobats, actors, musicians and singers and will be at the Big Top Tent next to the Santa Monica Pier through March 16.