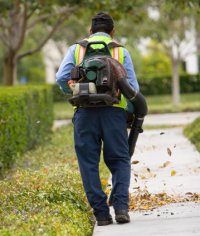 WhatsApp
Facebook
Twitter
Pinterest
ReddIt
Tumblr
Email
Print
SANTA MONICA—Ordinance number 1578CCS was adopted by Santa Monica in March 1991, effectively banning all leaf blowers in the city. Yet most residents of the beach-side community plead ignorance of this law when confronted by police about leaf blower infractions. In a March 2010 report from Officer Adam Gwartz, he states that in a period of just over two hours, he and his fellow officers issued nine citations and one warning.
Certain Santa Monica residents have become so disgruntled with the use of leaf blowers that, even with leaf blower laws in place, they saw the need to begin an anti-leaf blower website at stopleafblowers.com. The site allows residents to report the time and location of leaf blower-uses in the community, in hopes that law-enforcement will use the information to catch leaf blowing gardeners in the act. ***image3***
Santa Monica means business when it comes to leaf blowers: the official municipal code bans all leaf blowers, even electric ones. In the most severe violations, leaf-blowing citizens may be charged with a misdemeanor punishable by a fine of up to $1,000 or imprisonment in the County Jail for up to six months.
The most common complaints about leaf blowers are that they are noisy, they kick dust and debris into the air and the gas-powered ones create air pollution – adding even more smog to the city. Communities throughout the U.S. are also placing restrictions on leaf blowers. Other cities may allow blowers at selected times of the day, or they may allow electric blowers only.
The leaf blower issue is still a topic of discussion at Santa Monica City Council meetings. At their most recent gathering, Councilmember Kevin McKeown suggested adding a staff position to the city’s Office of Sustainability and the Environment, and shifting the responsibility of leaf blower law enforcement to that position, and away from the city’s police officers. In doing so, he believes the law may be more effectively applied.