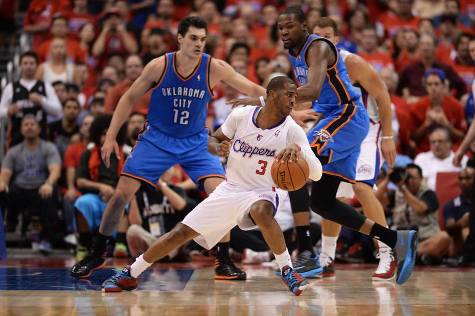 LOS ANGELES – It was indeed a sad day for Clippers fan on May 15, as the team lost at home to the Oklahoma City Thunder 104-98.  The team who many believed to be the NBA’s Cinderella team after the Donald Sterling scandal, didn’t have the fuel to take out the Thunder who were ready to close out the series.

Chris Paul was the leading scorer for the Clippers with 25 points and 11 assists, while his teammate Blake Griffin had 22 points, eight rebounds and eight assists during Game 6, before he fouled out with a little over 2 minutes left in the game. The game was neck and neck until the final minute where the Clippers were able to get themselves within 4 points of the Thunder.

With an astounding season behind them, the Clippers will now have the rest of the season to reflect what adjustments must be made to reach the Western Conference finals in 2015.  The Oklahoma City Thunder will do battle with the San Antonio Spurs in the Western Conference Finals beginning on Monday in San Antonio. Out in the east the Indiana Pacers are facing defending champs the Miami Heat in what is sure to be the best series of the playoffs this far.