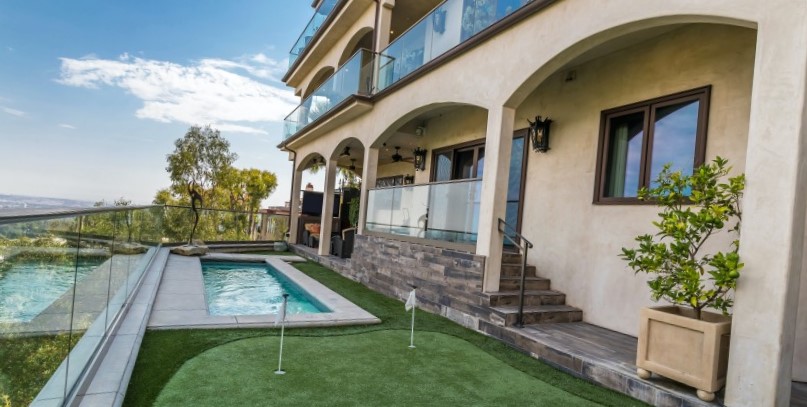 BEVERLY HILLS—Comedian Ron White, 63, who is known for his blue collar comedy, has placed his customized Beverly Hills home on the market for $7 million.

The property is located in the Beverly Hills Post Office area. The 4,800 square foot Spanish-style house is three-stories, has five bathrooms, three bedrooms, a recording studio, a putting green, a swimming pool, a private barbershop, and a wet bar.

The hillside house features one-of-a-kind built-in and handrails with crystals, chandeliers, and a separate office. The living room has a double-screen projector. The home has a 2,000-square-foot deck with a custom fire pit, and a flowing water statue.

The formal dining room and the kitchen area are on the main level of the home. Two master suites take up the entire top level. The home also features an elevator.
In the back of the property, there is a covered patio with a barbecue grill, and the home has panoramic views of the city below.

The listing is held by Marc Noah of Hilton & Hyland. Real estate records indicate Ron White paid $1.505 million for the property in 2010.

White is from Texas. He toured for years with the Blue Collar Comedy Tour, which consists of Ron White, Jeff Foxworthy, Bill Engvall, and Larry the Cable Guy. Nicknamed “Tater Salad,” he penned the New York Times best-seller, “I Had the Right to Remain Silent… But I Didn’t Have the Ability” in 2006. He released the Netflix stand-up special “If You Quit Listening, I’ll Shut Up” in 2018.