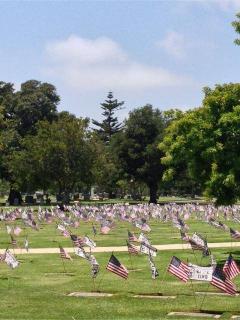 According to the Woodland Lawn Cemetery, Mausoleum, and Mortuary’s Facebook page, the event invited people to come “experience a military flyover’ as well as provided the opportunity to “be among the first to see the Commemorative Wall” that honored Santa Monica veterans would be unveiled at the Memorial Day celebration. The event also featured patriotic music from the Santa Monica Oceanaires and the Los Angeles Patriot Brass Ensemble. Cemetery and Mausoleum tours were also available.

A press release from the City of Santa Monica stated that “this year’s keynote speaker is Councilmember Robert T. Holbrook, who has served as Member and Mayor of the City Council for 24 years and as a Member and President of the Board of Education for eight years. A native of
Santa Monica, he also served six years in the California Air National Guard.”

Councilmember Holbrook proposed at last year’s annual Memorial Day Observance the installation of a Commemorative Wall. Holbrook was quoted in the release saying, “It would be nice to commemorate these people so that when Memorial Day services are held, people can remember those who were lost, husbands, sons and daughters of Santa Monica.”

AMC Theatres In Santa Monica At Risk Of Closure

Stock Market On The Rise