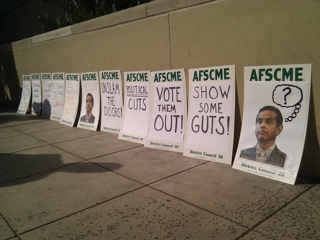 LOS ANGELES—On Monday morning, July 19, the group “Save the Library” held a protest and educational program at the Central Library. The demonstration called “Unslam the Doors” was a protest against library closures, reduced hours of operation and additional restrictions.

“Save the Library” was launched earlier this year with an aim towards preserving as much of the program as possible. As departments throughout the state and city governments face budget cuts, the library is undergoing serious renovations and many people are displeased. Libraries, which used to be open seven days a week, are now closed on Mondays and Sundays. Service hours have been reduced from 41.5 to 34 hours a week. On June 17, 160 pink slips were issued to library employees, reducing their workforce by one third.

Advocates of “Save the Library” fear these changes are only the beginning because aside from restricting access to educational materials for community members, people see libraries as a safe haven for children during after-school hours. Since the facilities are now closed on Mondays, kids will have to find other means of amusement after school.

Proponents of the changes see them as a necessary measure to negotiate the difficult economic times.  The closures are a result of budget and staff cut backs, which have been made in response to the financial burdens of the state.  However, patrons are reminded that library web-based resources continue to be available 24 hours a day at lapl.org.

Monday’s event was a forum for people to come together and voice their concerns. People are also urged to contact the mayor’s office and their local city council members, and let the officials know how library cuts are adversely affecting them.