UNITED STATES—Members of Congress have taken down their Prisoner of War/Missing in Action flags to display transgender pride flags in their place.

The POW/MIA flag was created for the National League of Families of American Prisoners and Missing in Southeast Asia and was officially recognized by Congress in conjunction with the Vietnam War POW/MIA issue.

“As the symbol of our Nation’s concern and commitment to resolving as fully as possible the fates of the Americans still prisoner, missing and unaccounted for in Southeast Asia, thus ending the uncertainty for their families and the Nation.”

According to their website, the National League of Families POW/MIA flag, sometimes the flag consists of a silhouette of a POW before a guard tower and barbed wire in white.  The words, “You Are Not Forgotten” appear below in white on a black background. 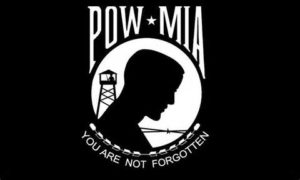 According to www.pol-miafamilies.org, there are still 1,589 Americans missing and unaccounted for from the Vietnam War.

Flags showing support for the transgender community were given to lawmakers by the National Center for Transgender Equality to “challenge the nation’s leaders to support trans people,” who reportedly stated, “that they are “under siege” by the Trump administration due to the trans military ban which took place back in 2017.

The ban prevents transgender individuals from serving in the U.S. military in any capacity. It is unclear why the National Center for Transgender Equality has waited two years to make a rebuttal to this law.

Members of Congress displaying their flags outside their officers on Capital Hills showing support for the transgender community included Nancy Pelosi, Alexandria Ocasio-Cortez, Bernie Sanders, and many others.

Bernie Sanders tweeted, “Discrimination has no place in our society. I am proud to display this flag as a symbol of my support for transgender people across the country.  We must stand with transgender people in all of our communities.”

Congresswoman Rashida Tlaib posted a video showing support for the transgender community calling them, “many activists and advocates.”

During this #TransVisibilityWeek, I would like to give a shoutout to the many activists and advocates back in #13thDistrictStrong fighting for the rights and protection of trans and gender non-conforming folks. To my trans and GNC neighbors, you have a fighter in me and I will work hard to ensure you have the protections and opportunity to thrive that you deserve. And to the National Center for Transgender Equality, thank you for stopping by and your continued work! #Justice4All[Video description – Congresswoman Rashida Tlaib with National Center for Transgender Equality executive director Mara Keisling outside of her office in front of the Transgender Pride Flag and the State of Michigan Flag]

The flags supporting the transgender community are being displayed over the Missing In Action and Prisoner of War flags, for Transgender Day of Visibility which was on Sunday, March 31.