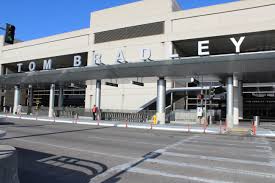 LOS ANGELES—Major changes are coming to Tom Bradley International Terminal at LAX. On Monday L.A. city officials announced a new cross-field taxiway at the city’s largest airport, which will help improve the safety and efficiency of large aircrafts moving on the ground before taking off and after landing. The $88 million project will include a taxiway that is proposed to be 3,437 feet long, and also wide enough to accommodate large planes and jets that travel between the north and south runway complexes, officials said.

This project is the latest in a major overhaul of LAX which has been in need of modernization for years. LAX is one of the busiest airports in the U.S. The current cross-field routes are not long or wide enough to accommodate an Airbus A380. However, with the new improvements, the airport will be able to handle jets of this size and several more jets will be able to use the runway and save time for take offs and landings in the future.

Officials from the Federal Aviation Administration say the new improvements will help alleviate the current congestion that affects travelers and air traffic controllers at the airport. In addition to the enlargements, the new section will also include room for new gates, new concourses and a great central hall filled with restaurants and concessions.

The upcoming project will also require the closing and relocating of two existing cross-field taxiways immediately west of the Bradley terminal. The closed taxiways will also be widened and improved to handle larger jets than it currently is capable of doing.

“For Monday’s ceremony, Qantas supplied an A380 that was en route from Australia. It landed on one of the airport’s southern runways and then moved along the new taxiway to reach its gate on the north side of the Bradley terminal,” according to the Aircraft Rescue & Firefighting website. L.A. firefighters were also on hand for the announcement and inauguration ceremony. In a statement to the press, Gina Marie Lindsey, who is director of Los Angeles World Airports said, “It is the first taxiway at LAX designed for the largest aircraft in use today.”