UNITED STATES−Mason Trevor Toney, 28, of Orange County, Florida was arrested after a political altercation led to his boss being stabbed to death. Orange County Sheriff’s Office (OCSO) initially put an alert out on social media searching for Toney who murdered William Steven Knight. 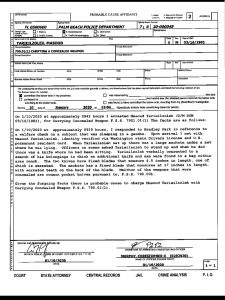 According to the affidavit, one of Toney’s co-workers contacted 911 identifying him as the suspect. When deputies arrived at the scene, the deceased was found lying next to an excavator, with “a brand-new American flag thrown on the side of his body.”

The flag did not belong to anyone at the job site including the victim.

According to reports,  Toney and Knight were long-time family friends. Toney was described by his co-workers as being against the government and Knight, was a Republican and supporter of President Donald Trump.

In a statement taken by Detective Fabian Ramirez, there was witness testimony of the series of events beginning with Toney and Knight riding together from one job site to another.  Witnesses say, an argument ensued over Toney’s political views. 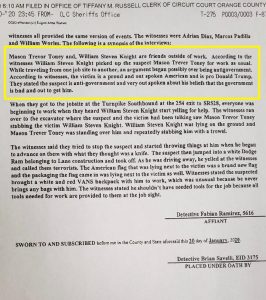 In the sworn statement, witnesses indicated when they arrived at the other job site, they could here Knight screaming for help. Toney was seen stabbing the victim, who they attempted to assist, but the suspect approached them with what they suspected to be a knife, but it was a trowel, a tool used to spread cement.

Toney jumped in his truck and drove away yelling “terrorists.”

Toney was later captured near Bravard County after crashing his vehicle while being pursued by authorities. He was charged with first-degree murder and is being held without bond in Orange County jail.