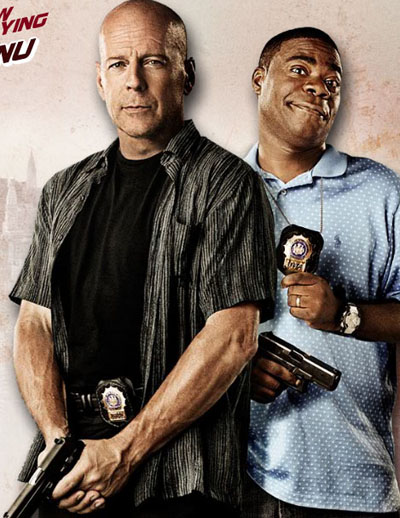 HOLLYWOOD —The one thing you can always count on in Hollywood is for a Bruce Willis film premiere there to be huge stars lined up on the red carpet to see a film he’s involved in. Why? Because they are normally funny, violent and sexy. “Cop Out” is all of those things. Heavy on the funny part! Director Kevin Smith helms a comedy about a veteran NYPD cop whose rare baseball card is stolen. Since it’s his only hope to pay for his daughter’s upcoming wedding, he recruits his partner to track down the thief, a memorabilia-obsessed gangster.

The film also stars “SNL” alum Tracy Morgan as Paul Hodges, an unlikely partner to Willis’ Detective Jimmy Monroe. The two have amazing chemistry and the laughter in the theater will be uncontrollable. Michelle Trachtenberg who plays Ava is sensational in her role. There are so many great cast members it’s virtually impossible to list them. I was not sure that Morgan’s over the top humor would match well with Willis’ dry delivery, but it does match perfectly together.

The script by brothers Mark and Robb Cullen isn’t the best, but it is good in the way that it flows and the director who is known for not wasting a lot of time with back story in his films does a brilliant job of making the viewer feel like we’ve known these two men forever. Perhaps we all have a relative or two that reminds us of Hodges or Monroe? Whatever it is, it works brilliantly with the two top stars.

There are many one-liners in this film and although they tend to get a bit tedious at times, the film moves quickly enough that they don’t stay on any one subject long enough to bore the moviegoer. Kevin Smith may not be welcome anytime soon on Southwest Airlines, but his more than welcome to direct any film I see in the future.

“Cop Out” gets Four and a half of Five Stars. The film opens on Friday, February 26, in theaters across the U.S.