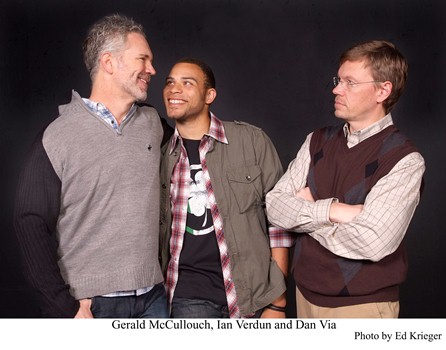 HOLLYWOOD—Actor Gerald McCullouch has portrayed firearms technician Bobby Dawson on the number one rated CBS primetime series “CSI: Crime Scene Investigations” for 10 seasons, and was a recurring guest host of “FYE!” on the E! TV network. He stars in the current hit gay film “Bear City,”and was recently honored by OUT Magazine as “one of the 100 most compelling people of 2010.” Gerald recently ended his NYC run of the play “Daddy” and now brings it to L.A. The prolific actor also portrayed Jesus in “Jesus Christ Superstar” on a European tour.

The handsome and charming actor and former model once appeared in two different billboards simultaneously in Times Square and on Sunset Boulevard. However, the mega star is nothing but humble, kind and gracious during our interview, in which the actor discusses with us exclusively about his L.A. stage debut in “Daddy.”

Q-This role in “Daddy” is quite a departure from your role in CSI. Was it daunting for you to take the role?

A-“I fell in love with this script the moment I read it. It’s such a funny, mysterious and really sexy story. With a heartbreaking turn of events. So the emotional journey dictated by the story is daunting. Very daunting. But that’s the job. And I dig it.”

Q-Do you empathize with Colin in this role, or do you have indifferent feelings in roles that you play?

A-“Oh. Empathy always. Never indifference. Playing Colin, I get to experience the world from a point of view that really resonates with me. So my empathy for this role is probably greater than others. But tomato, tomahto, right?”

Q-The director is none other than Rick Sparks. Have you worked with him in the past?

A-“I haven’t. And I am so psyched this opportunity presented itself for us to work together. He has a beautiful passion for this story. Having done the play and the role in New York under different direction, it’s exciting for me to come back to it under Rick’s direction and investigate different aspects of it. It’s been a great experience thus far and I think the production’s going to be top notch.”

Q-I recently did a role in Henry Jaglom’s “Queen of the Lot” and everyone warned me that he would be difficult. He was anything but, he was very certain about the film and the roles he created for it. Are you ever intimidated to work for an acclaimed director like Mr. Sparks?

A-“Stature can be big-time intimidating for me. But whether it’s a director, or actor, or DP, or whomever, our common goal is to tell whatever story we’re telling. Accurately and honestly. So if that’s the common goal, the intimidation dissipates. Which is great because it’s like a short cut into having really rich and unforgettable relationships with rockin’ people.”

Q-What is your best description of the play “Daddy?”

A-“All right. Here goes, Tommy! Hope I get this right. It’s a laugh-out-loud, yet suspenseful story of a very sexual, life-long bachelor who unexpectedly falls for a much younger man and the result is a climactic confrontation with his best friend that will forever change their lives. Too wordy? Should I have just said ”˜it’s better than Cats’? Aw well.”

“Daddy” is written by Dan Via, is directed by Rick Sparks, presented by Raquel Lehman (Theatre Planners) and co-stars Ian Verdun and Dan Via.