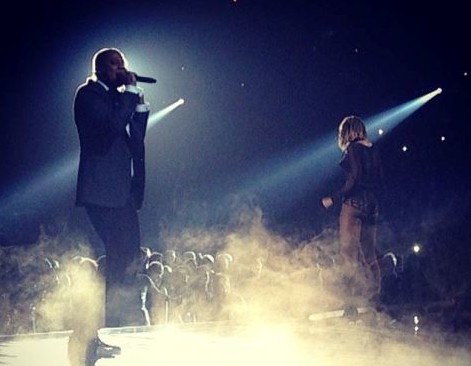 LOS ANGELES—Most of the award ceremonies this year have been focused on the big movie and TV stars, but Sunday took a detour to focus on music’s biggest night, as the 56th Annual Grammy Awards. Pharrell Williams was a big winner taking home multiple Grammy’s including Producer of the Year Non-Classical, as well as Daft Punk and Mackelmore & Ryan Lewis.

The big award of the night, Album of the Year went to Random Access Memories “Daft Punk.” It was a funny moment for those who caught the camera, as it looked like Taylor Swift almost jumped out of her chair thinking her name had been called.

With big time names like Taylor Swift, Katy Perry, Madonna and Beyonce set to perform; it was a night not to be forgotten. The big soiree opened with a hotly anticipated performance by pop superstar Beyonce and her husband Jay-Z, who sung their hit “Drunk in Love.”

She was sultry as she serenaded the audience with wet hair and a chair. It was full of energy and a sultry side of Beyonce that is not common to many of her fans. The chemistry between the couple on stage is almost impossible to describe.

The competitive race for Song of the Year ultimately ended with the award going to Lorde for “Royals.” Definitely tough race, but I well deserved for the new sensation that had everyone singing the song this year. On the other-hand of things, Record of the Year was presented by Steven Tyler and Smokey Robinson to Daft Punk feat. Pharrell Williams for “Get Lucky.”

The ceremony was hosted again by “NCIS Los Angeles” star LL Cool J. I’ve said this before, the Grammy awards really doesn’t need a host; it’s an unnecessary take-up of time that could further move the pace of the ceremony.

Best New Artist was awarded to Mackelmore and Ryan Lewis. I was not upset with the winner, but thought Kendrick Lamar may have been a better fit for the trophy considering his album was of such critical acclaim. The duo walked away with a total of four awards including Best Rap Album.

New Zealand sensation Lorde, performed an acapella version of her hit “Royals” that was absolutely stunning to say the least. The energy in the singer’s voice was so authentic. The award for Best Pop Duo/Group Performance went to Daft Punk & Pharrell Williams for “Get Lucky.” Honestly that was an award that may have been swayed to “Just Give Me A Reason” or “Stay.”

Katy Perry proved that everything is not a bubble gum pop, as she took a dark theme on the stage for her single “Dark Horse,” with a bit of bouncy choreography to go along with the catchy tune. She was joined on stage by Juicy J from Three 6 Mafia.   Robert Thicker collaborated with Chicago to perform his audacious hit “Blurred Lines,” which had an ole 1903s style feel to it.

Best Rock Song went to “Cut Me Some Slack,” which saw Beatle star Paul McCartney taking to the stage. Taylor Swift hit the stage to perform the ballad “All Too Well,” which got off to a slow start, before Swift amped up the energy towards the middle of the song to increase the intensity. A performance that I was looking forward to was the collaboration between Pink and Nate Ruess for “Just Give Me a Reason.”  I will admit I was a bit frustrated to see Pink once again perform the acrobatic routine, which has become a staple it appears for the past three years it seems for the song “Try,” but it was absolutely performance art at its best.

That aside, the vocals from the rocker and Ruess were unbelievable and out of this world. That woman can truly belt it out. Hands down one of the best performances of the entire telecast!  The Grammy for Best Pop Solo Performance went to Lorde for “Royals.” She singer was quite nervous while accepting her award on stage. For Best Rap/Sung Collaboration Jay-Z got to accept the award for his collaboration with Justin Timberlake for “Holy Grail.”  It was a great moment to see Jay-Z let out a few laughs on stage courtesy of Oscar-winner Jamie Foxx. He dedicated his award to his wife and his daughter.

The collaboration between Kendrick Lamar and Imagine Dragons was indeed something special.  The mesh-up of rock and hip-hop is something special to say the least as they rocked out to “Radioactive.” Oscar-winner Julia Roberts introduced a special performance by Beatles band members Paul McCartney and Ringo Starr. It was indeed a moment that Beatles fans have been eagerly waiting years for.

Best Pop Vocal Album was given to Bruno Mars “Unorthodox Jukebox.” Finally, this guy finally gets some Grammy love for consistently putting out great, fun music in the past few years. Blake Shelton hit the stage with Willie Nelson and Kris Kristofferson for a country performance that shut the house down.

Best Country Album went to s very stunned Kacey Musgraves for “Same Trailer Different Park.” The singer was extremely emotional while accepting her award on stage, as she fought back tears.  A bit of surprise as some expected Blake Shelton or Taylor Swift to take the prize. Daft Punk hit the stage with the assistance of Stevie Wonder, Nile Rogers, and Pharrell Williams to perform their hit “Get Lucky.” The addition of superstar Stevie Wonder only took the song to even bigger heights.  I will be honest it would be great to see the gentleman behind the music actually remove their masks, so the audience can see their face. Sara Bareilles performed her infectious hit “Brave” with assistance from her idol Carol King.

Mackelmore and Ryan Lewis performed their inspirational ballad “Same Love” with assistance from Mary Lambert and pop legend Madonna, as a remarkable moment took place at the ceremony as 33 couples gay and straight were married by Queen Latifah.  Madonna then took the stage to sing “Open Your Heart;” a performance full of raw emotion and a powerful message.

I would argue this was one of the more entertaining Grammy ceremonies than in previous years, but if the Recording Academy is hoping to get more viewers to tune in, they should consider handing out more awards. I’m sorry, but nearly four hours to hand out 10 awards is a bit long. Especially, considering the Oscars which hands out nearly 24 awards and caters musical performances can end a ceremony in about 3 hours, there is no excuse.  It’s an awards show for a reason: people want to see awards handed out. I’m already guessing who’ll be the music highlight for next year’s ceremony. Let’s just say she opened the ceremony this year! Until 2015 Grammy lovers!