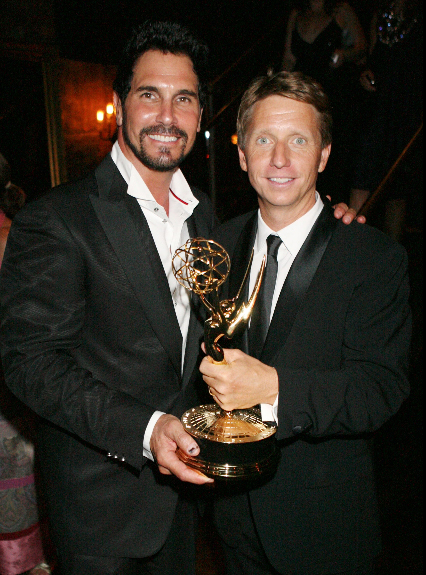 HOLLYWOOD —On Wednesday morning the nominations for the 37th Daytime Emmy Awards were announced. From soap operas to game shows to talk shows, the Daytime Emmy Awards celebrate the best of daytime television. Dr. Travis Stork from “The Doctors” and Bree Williamson, one of last year’s nominees for her role on “One Life to Live,” announced this year’s nominees on “The Early Show.”

“The Bold and the Beautiful,” last year’s winner for Outstanding Drama Series, was nominated again in the same category. Included in the show’s nomination in this category are Bradley P. Bell, Executive Producer; Rhonda Friedman, Supervising Producer; Ron Weaver, Senior Producer; Adam Dusevoir, Coordinating Producer; Cynthia J. Popp, Producer. This marks the fifth nomination for”B&B” in this category. Surely “B&B” got noticed for their November 2009 amazing storyline, which was led by Betty White in an amazing tear-jerking, all-female episode where Stephanie and Pam (played by Susan Flannery and Alley Mills) make a heart-wrenching decision and say a final goodbye to their ill-tempered mother, “Ann.” The other nominees in this category are, “All My Children,” “General Hospital” and “The Young and the Restless.”

This year’s top soap awards nominees include the category for Outstanding Lead Actor in a Drama Series: Peter Bergman, “Y&R,” Doug Davidson, “Y&R,” Jon Lindstrom, “ATWT,” Michael Park, “ATWT,” and James Scott, “DAYS.” Soap insider Michael Logan spoke exclusively with Canyon News about this year’s exciting Lead Actor race.  “It’s terrific to see so many first-time nominees in the race, and so many of the usual suspects left off the list,” says Michael Logan of TV Guide Magazine. “For the past six years, the best actor award has gone either to ”˜General Hospital’ Anthony Geary (Luke) or ”˜The Young and the Restless’ Christian LeBlanc (Michael), neither of whom got a nod this year. Enough already! The voters wisely decided it’s time to spread the wealth. I’m especially excited to see ”˜Days of our Lives’ James Scott (EJ) and ”˜As the World Turns’ Jon Lindstrom (Craig) get their first nominations ever, and over the moon that ”˜Y&R’s’ Doug Davidson (Paul) got a nod, too. He’s been so marvelous ”“ and so marvelously real and understated — for 31 years and has only one other nomination to show for it. I’m rooting for him!”

Other Daytime Television nominations are as follows:

This year’s Lifetime Achievement award will be presented to the creator of “All My Children” Miss Agnes Nixon.

The Daytime Emmy awards will be broadcast from Las Vegas for the first time when the awards show airs on the CBS network on Sunday, June 27, from the Las Vegas Hilton at 8 p.m. ET and PT.