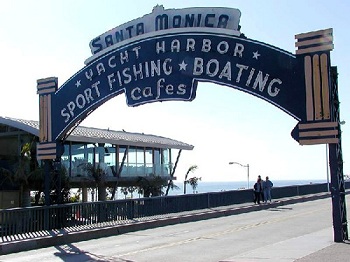 SANTA MONICA – A hit and run near the Sana Monica pier left one person dead on Saturday, March 22.

According to Sergeant Jay Moroso of the Santa Monica Police Department, two women were struck in the early hours of the morning by a hit and run driver on the 1600 block of Ocean Avenue.

Around 1:00 a.m., the two women were hit by the suspect as they were crossing the street just south of Seaside Terrace. The suspect did not stop to help as he fled southbound downOcean Avenue.

Sgt. Moroso noted that the women were given medical aid on-scene. The victims included a mother and daughter, ages 61 and 32. The daughter, a resident of Santa Monica, suffered only minor injuries. The mother, who was from Wisconsin, was found unresponsive and with major head trauma. She was taken to a local hospital after being administered CPR, but police officials were notified of her death at around 2:00 a.m.

The Santa Monica Police Department are on the lookout for the suspect and the vehicle. The suspect was described as a white male, and his car was said to be a silver sports coupe with tinted windows.

Ferris Wheel Will Light Up For 4th of July