UNITED STATES−President Donald Trump has received more threats against his life after the death of Qassem Soleimani. Those threats have been close to the President’s home.

An Iranian national who reportedly had an ax, knives, a machete, and $22,000 in U.S. currency in his possession was arrested four miles away from the Mar-a-Lago estate in Florida. The suspect has been identified as Masoud Yareioeill Zoleh.

According to Palm Beach Daily News, Zoleh was taken into custody on January 10, on the Flagler Memorial Bridge by officers from the Palm Beach Police Department and two plain clothes officers from another police department.  The suspect’s vehicle was searched by the bomb squad at a nearby airport.

Zoleh was arrested days after an unverified claim on an Instagram account that was posted during the funeral of Soleimani. The post suggested that Iranian authorities offered an $80 million bounty for President Trump’s head.

Canyon News spoke to the PBPD for more information. Staci Mussmacher, a Records Specialist said, “At this time, we have no information regarding Masoud Yareioeill Zoleh, other than the attached photo that was taken at the Police station on January 10, 2020.  This is not a mug shot.  We issued him a Notice to Appear on (January 29, 2020) at the Palm Beach County Criminal Justice complex.  He was released the same day as the incident, (January 10, 2020) from the Palm Beach Police Department.” 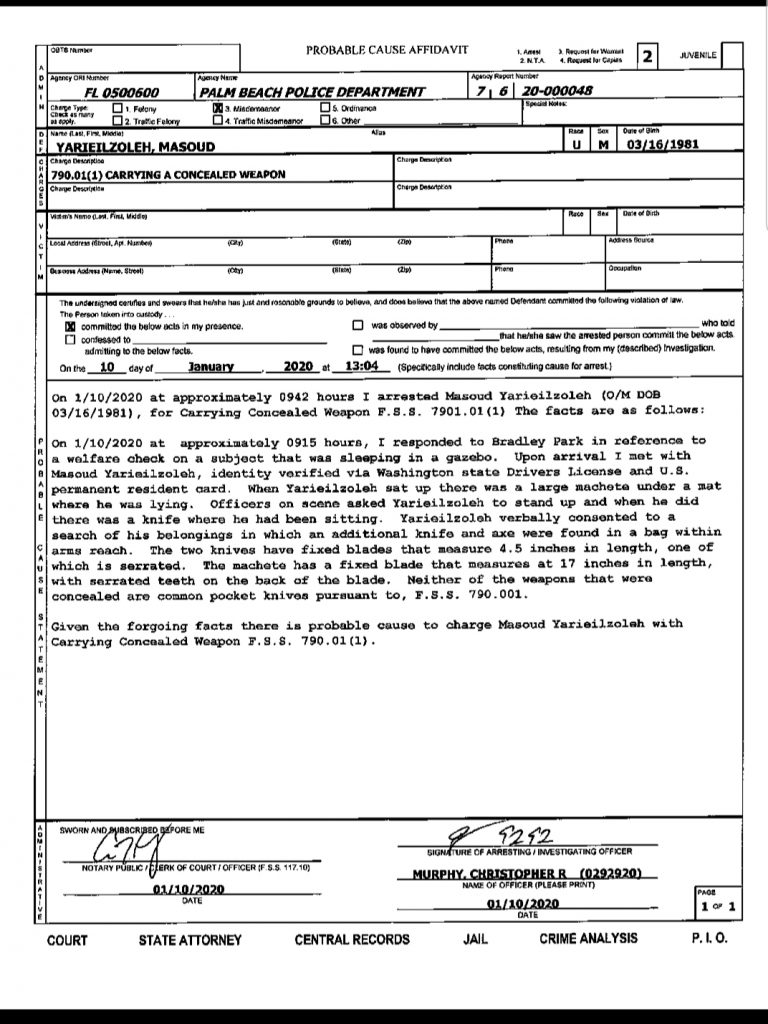 The FBI and other federal authorities were notified and are assisting in the investigation.

In a separate incident, Chauncy Devonte Lump, 26, of Ft. Lauderdale, Florida is facing charges in Broward County after making death threats via social media. A criminal complaint was made against Lump after a seven-minute-long video on Facebook Live where he was wearing a makeshift turban.

Footage obtained is in another language, where Lump stated:

“He killed my leader, and I have to kill him. I need to find the Donald, because if I don’t find him, I am going to have to blow up Broward County and the Feds are watching. I am not afraid of the Feds.”

Documentation indicates that Lump was seen in the video with what appeared to be a loaded AK-47.

He admitted to law enforcement that he made the video following the death of Soleimani on January 3, but that the threats in the video were a joke.