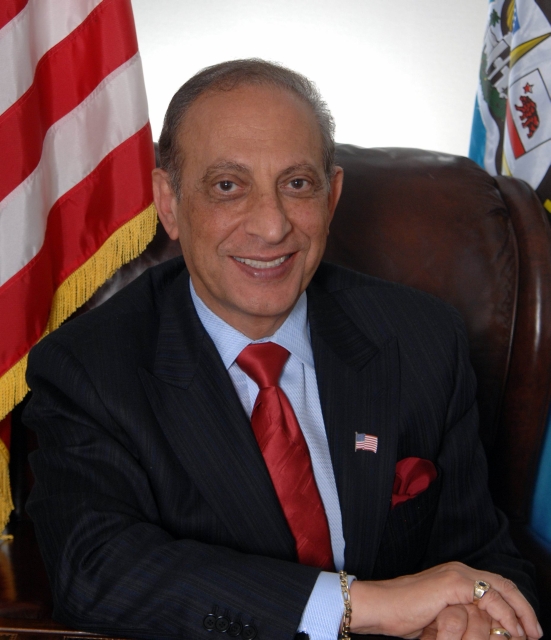 BEVERLY HILLS—Jimmy Delshad took the mayoral reins once more this week as he was sworn in as mayor for the second time on Tuesday, March 16. Delshad was sworn in as 85th mayor of Beverly Hills at a ceremony at the Academy of Motion Picture Arts and Sciences’ Goldwyn Theater.

Former mayor Barry Brucker was sworn in as Vice Mayor alongside Delshad at the ceremony.

Delshad has been serving as a member of the Beverly Hills City Council since 2003 and was previously installed as city mayor in 2007. He was first sworn in as mayor of Beverly Hills almost exactly three years ago, on March 27, 2007.

Delshad has been an active member of the Greater Los Angeles community since moving to California nearly 50 years ago. According to his biography, Delshad received his BS in Electrical Engineering from California State University Northridge. Delshad has lived in Beverly Hills for 18 years and first ran for city government after selling his business and devoting his time to his community. “[I] did not seek to serve [the city]… out of a sense of national or ethnic pride. Instead, I felt I owed a debt to this city and this country that welcomed me and allowed me to use my talents to build a successful life,” Delshad explained in 2003.

Delshad, an Iranian immigrant and community pillar, has played an active role in both the business world and the city government. He began a computer and data storage business in 1978 and sold the business just over 20 years later.

Delshad dedicates his time to various religious, cultural, charitable and social groups, playing roles in the organization and direction of such organizations as the Magbit Education Foundation, the Beverly Hills General Plan Update Committee, Beverly Hills High School’s PTA, Sheba Medical Center and the Jewish Federation among others. Delshad has served as a participant and fundraiser for such local galas as the Beverly Hills Police Black and White Ball, the Beverly Hills Chamber of Commerce Ball and the Beverly Hills Fireman’s Association’s Backdraft Ball. Delshad served as Sinai Temple’s president between 1999 and 2001.

In 1990, he received the Man of the Year award from Sinai Temple, and in 1999 he received an award for his leadership from the Masorti/Schechter Institute. In 2005, he was awarded a community appreciation award from the B.H.P.E.T. Homeowners Association. In June 2008, Delshad received an honorary doctorate from American Liberal University, in the field of Humanity and Business.

Delshad takes over the post of mayor from Nancy Krasne.

The mayor has a number of important responsibilities. According to the City of Beverly Hills, the mayor “serves as the presiding officer and acts as Chair at all City Council meetings, is the spokesperson for the City Council and is the City’s ceremonial representative at public events and functions.” Combining his civic responsibilities with his background as an electrical engineer and computer businessman, Delshad has expressed interest in such technological improvements as bringing smart irrigation technology to Beverly Hills, in addition to developing ways to make paying for parking less painful, through machines which could accept bills and/or ways for drivers to pay for additional parking time through phone-accessible applications.”

The first mayor of Beverly Hills was Will Rogers, who served the post of honorary mayor from 1926 through 1928.