WEST HOLLYWOOD—The Los Angeles County Sheriff’s Department West Hollywood Station Detective’s Bureau is asking for the public’s help in finding the suspects to a burglary that occurred at 509 North Robertson Boulevard on June 23, at approximately 5:00 a.m.

According to a press release from the LASD, detectives discovered that forced entry was made into “Gina Amir Atelier” using a spark plug. Once inside the establishment, one of the suspects took diamonds and other precious jewels. That individual was captured on video surveillance committing the burglary and running to an awaiting vehicle outside the establishment before fleeing the scene. 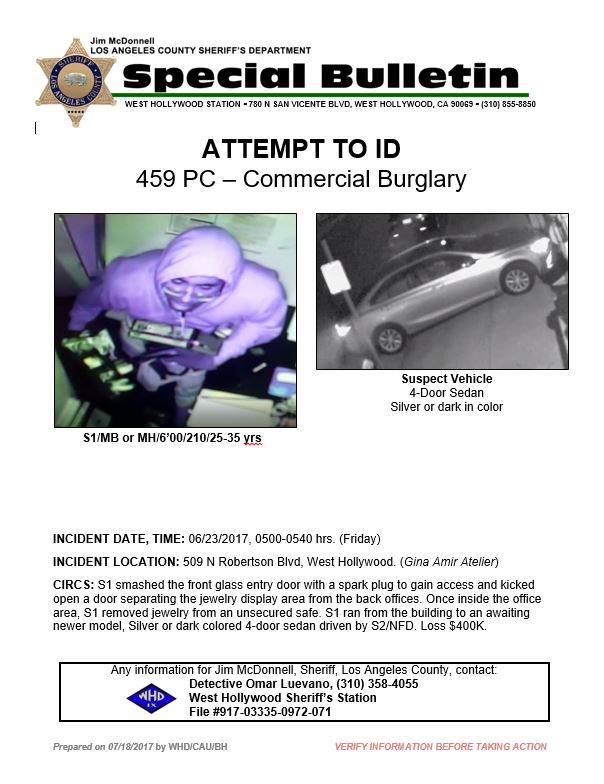 The suspect is described as an African-American or Hispanic male, standing 6 feet tall, weighing 210 pounds and between the ages of 25 and 35.The suspects’ vehicle is a 4-door silver or dark-colored sedan.

Anyone with information regarding the incident is asked to contact West Hollywood Sheriff’s Station Detective Luevano at (310) 358-4055. For those wishing to remain anonymous, call “Crime Stoppers” by dialing (800) 222-TIPS (8477), use your smartphone by downloading the “P3 Tips” Mobile APP on Google play or the Apple App Store or by using the website http://lacrimestoppers.org.