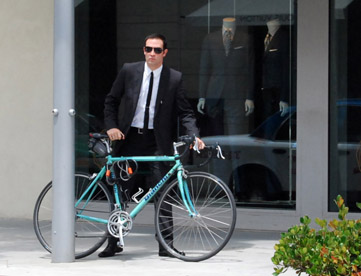 HOLLYWOOD—On May 28, a dispute occurred between the Los Angeles Police Department’s Hollywood bicycle unit and a group of bicyclists that had arranged to rally a protest against British Petroleum.

The incident occurred at about 9:30 p.m. between Hollywood Boulevard and Highland Avenue, with the officers patrolling the Entertainment District and with about 400 protests bicycling east down Hollywood. A video had been taped of officers using a reported use of force in detaining several of the protesters, and is posted on YouTube at http://www.youtube.com/watch?v=bl7WWkQrkyo&feature=player_embedded.

The video was posted by a user under the name of “manueldogg” who writes in the video description: “After seeing the cops swing their batons at riders, jump in front of riders, attempt to stick batons in wheel spokes, and kick bikes to cause the riders to go down I started filming. When I was spotted recording the cops they tackled me down for no reason what so ever.”

In the video, sirens and cheering can be heard in the background, with several officers and a police car entering the scene.  In the video, a man can heard shouting, “What the [expletive] was that for?”

Two officers are then seen grabbing one of the bicyclists, (apparently the man filming the video), and repeatedly ordering, “Get up!”

The bicyclist can be heard asking the officers, “What did I do?”

A woman can be heard shouting in the background, “Police brutality!”

A complaint had been filed by representatives of the Los Angeles biking community, according to the Los Angeles Police Department. LAPD reports that the officers were watching for red light violations and issuing citations as part of enforcement efforts. In a statement prepared by LAPD, the department’s Assistant Chief Earl Paysinger says, “In response to what we learned, we immediately launched a full-scale investigation to determine the facts surrounding the events. The Department’s Professional Standards Bureau has taken the lead in the inquiry and the Police Commission’s Inspector General has also been made fully aware of the matter.”

LAPD reports that since November 2009, the LAPD Office of Operations has worked closely with representatives of the biking community to improve relations, make the streets safer for bicyclists and discuss and identify issues involving bicyclists that are problematic for the motoring public. LAPD reports that the department’s Internal Affairs Group is investigating the reported use of force incident.