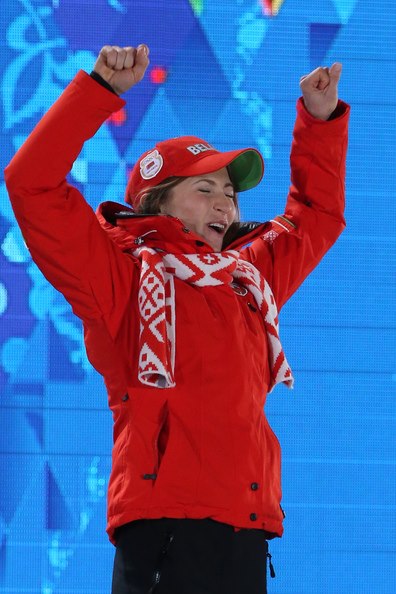 After winning gold in the 10-kilometer pursuit, Domracheva went into today’s with a hot streak as she improved on her bronze medal from 2010. In the 9.32 mile race the Belarusian started 13th wanting to improve on her 15th place finish in Vancouver. She could become the first woman biathlete to win back-to-back gold medals in the Olympics since 1994 when Canada’s Myriam Bedard won the sprint and individual.

Russia’s Olga Zaitseva came out clean in the first trip to the shooting range as the best hope for the host country. Domracheva came in with nearly a minute ahead of Zaitseva and left with an 18.5-second lead into first.

Norway’s Tora Berger started two places behind Domracheva as she came to defend her gold medal from 2010. The Norwegian did not start off right as she missed her first shot in the opening round at the range where the penalty was a one-minute time differential moving her into 10th. American Susan Dunklee missed her last shot in the first stage as she started fifth, still unable to make a statement for the United States.

Slovakia’s Anastasiya Kuzmina who won the gold in the women’s sprint came to the first round and went clean trying to go for her second gold. She took the lead from Czech Gabriela Soukalova by half a second, but wouldn’t hold on for long. She finished way off the podium with a 27th place finish.

Dunklee came into the second round, but didn’t fare better as she missed another target, moving into last among the early leaders. Berger came into the second round where standing didn’t work out for the former Olympic champion in the event as she missed two shots, putting her far back from making a comeback. “It was not what I had hoped for before the start,”Â said Berger. “Today was not my day. I had too many misses in the shooting, and on the course also it was not my best day.”Â Domracheva came into round two with a 90-second margin, but failed to take the lead from Zaitseva missing once. She did fare better in her third trip to the range doing five-for-five, holding an 83-second lead with one last trip back to the range.

Finland’s Kaisa Makarainen screwed up her chance to become the first Finnish woman to win an Olympic medal. In the fourth round of shooting, still trailing Domracheva by a margin, she missed two targets, leaving her to finish 16th, four minutes back. She continued to have an amazing run coming into the last round of shooting with Gasparin shooting in the prone position. She shot 20 for 20 while Domracheva made it clean with a shot in the middle, working her way out to the ends.

Domracheva’s came to the line finishing 49:19.6, holding a 3:47 lead ahead of Zaitseva even with the one missed shot and overtook her to take home the gold. Gasparin posted a time of 44:35.3 that looked good enough for the silver medal as she went through clean all four rounds.

She became the first Swiss biathlete to win a medal for her country. The 29-year-old had good reason to push for her best finish in two Olympic starts. Gasparin got to compete with her two sisters in today’s race. Skardino crossed at 44:57.8, going perfect where she secured her first Olympic medal. “It’s always been my dream to be on one podium with Darya,”Â Skardino said. “Now that dream has come true.”Â

“It’s amazing. I got the info during the race that Nadezhda was second,”Â said the gold medalist. “I wasn’t surprised because she is such a good shooter.”Â

Belarus has never been the best at the biathlon until Domracheva scored the country’s first medal in the sport. The dominance that the Belarusian women showed in the race could be a precursor to becoming a powerhouse. “We have a really good team,”Â Domracheva said. “And the Olympic races are not over yet,”Â she added.