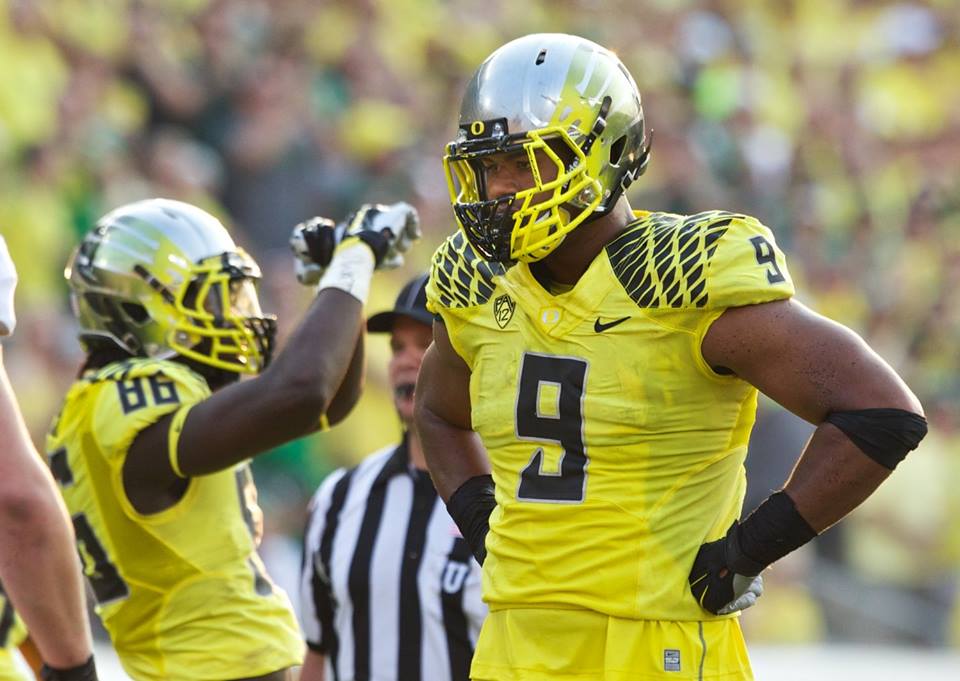 This draft was not only a crucial one for the rookie head coach, but also for 49ers General Manager Trent Baalke, who has witnessed his once mighty roster slowly wither away in an offseason defined by free agency departures and early retirements.

The team selected Oregon defensive tackle Arik Armstead with their first round pick (No. 17 overall). After trading down two spots from their original position at 15th overall, Baalke got the man he wanted all along.
Though many have questioned the selection of Armstead, who many believe to be a raw athletic talent with more upside than polish, Baalke felt as though the team’s depth along the defensive front afforded them the luxury of drafting the Oregon star and bringing him along at a slower pace.

The selection may very well bear fruit for Tomsula and Baalke down the line. It is difficult not to question the decision to pass on an NFL ready starter such as Shane Ray or Alvin Dupree in favor of a developmental prospect.

In day two, the SF 49ers used their second round pick on another player considered to be a reach, nabbing Samford safety Jaquiski Tartt with the No. 46 overall pick. Tartt, the high school buddy of 2014 first-round safety Jimmie Ward, was actually surprised to be taken so high. The slot DB wasn’t expecting to come off the board until the fourth or fifth round.

And while the first two picks had some wondering what logic, if any was being used in the San Francisco war room, the team’s third-round selection of Virginia linebacker Eli Harold significantly redeemed the team’s early-draft haul. Harold is a lightning-quick pass-rusher that has amassed 17.5 sacks and 36.5 tackles for a loss over his last three seasons with the Cavaliers. A defensive end in college, Harold looks to be an instant contributor as a rush linebacker in the team’s nickel packages.

Following the Harold selection, the team’s most noteworthy picks were tight-ends Blake Bell (fourth round) and Busta Anderson (seventh round), moves that gave the team a whopping eight tight-ends on its preseason roster.

In another shocker, the team selected big-legged Clemson punter Bradley Pinion in the fifth round. Pinion is expected to compete with incumbent starter Andy Lee for the right to pin NFC West offenses deep in their own territory.

Though the draft certainly came with a number of head-scratchers, Baalke lived by the best-player-available strategy throughout, neglecting pressing needs such as cornerback and inside linebacker in favor of picks he viewed as value choices. For now, the GM appears comfortable with the cast of athletes at his disposal, taking comfort in the knowledge that a considerable portion of 2012’s NFC Champion roster remains intact.