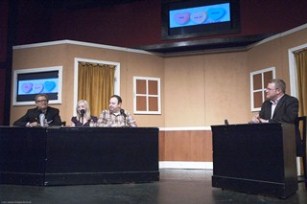 Drew Carey, host of “The Price Is Right” on CBS, joined “The Fix-Up Show with J. Keith van Straaten” as celebrity panelist at the ACME Comedy Theatre in Hollywood last night. The live-on-stage matchmaking show features a real single Angeleno being fixed up on a date by a panel of two people who know the single well, and one celebrity who’s never met the person. “The Fix-Up Show,” a genuine reality show performed exclusively for a theater audience, is produced and hosted by J. Keith van Straaten, with co-hostess Patti Goettlicher.

Drew Carey and the panel interviewed three lovely ladies, ultimately choosing Lena, a comely brunette dance teacher, to go on a date with Dylan, a square-jawed library coordinator. The pair was whisked off to their date at Amalfi Ristorante. The runner-up, Kim, an energetic trapeze instructor, had coincidentally been the runner-up on Drew Carey’s “The Price Is Right,” prompting Carey to tease, “She didn’t win the date, and she didn’t win the showcase either.” Host van Straaten replied, “Why don’t you want Kim to be happy?”

Upcoming scheduled appearances are scheduled for Susan Olsen (“Brady Bunch”) on December 1, and this week’s episode of “The Fix-Up Show” features celebrity panelist Alex Borstein (“Family Guy”) reuniting with host J. Keith van Straaten on the ACME stage for the first time since 1997, when they performed sketch comedy in the ACME ensemble. The show will begin with a video showing how the pair matched up on last night’s show hit it off on their date.

Show info and tickets are available at thefixupshow.com

WHAT: In this new weekly panel/matchmaking comedy show, host J. Keith van Straaten (“Beat The Geeks,” “What’s My Line? – Live On Stage”) welcomes celebrity guests and real single Angelenos looking for love. Two strangers will be fixed up on a date, live on stage! Fresh from its hit run in New York City, where Celebrity guests included Dick Cavett, Jeff Garlin, Eve Plumb, and Aasif Mandvi, guests for this run will be announced shortly.

WHO: Host/Producer J. Keith van Straaten last appeared on the LA stage on “What’s My Line? – Live on Stage,” with celebrity guests including Larry King, Amy Brenneman, Drew Carey, and Shirley Jones. He hosted Comedy Central’s TV game show “Beat The Geeks” and is often seen commenting on crazy TV clips on E! Entertainment Television. His essays on dating and Los Angeles have appeared in The Jewish Journal, Tango, and Backstage. And he’s single! More at jkeith.net.