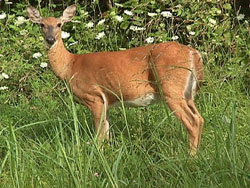 MALIBU—On June 2, a man who had been driving on Kanan Dume Road fell down the side of a steep incline after maneuvering his vehicle to avoid hitting a deer.

The incident occurred at around 12 a.m. in an area south of Newton Canyon Road, where the 22-year-old motorist reportedly fell down the cliff for approximately 300 feet while inside his vehicle.

Despite the severity of the fall, the driver survived without major injuries. Rescuers pulled the man back up to the road in a litter basket at about three hours after the accident. He was transported to a hospital as a precautionary measure, and the Jaguar he had been driving remained where it had landed.