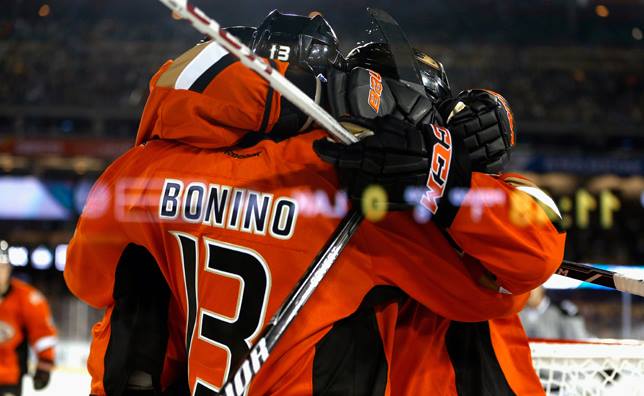 LOS ANGELES—The glitz and glamour of outdoor hockey was in attendance at Dodger Stadium, but the Kings’ offense was the only part missing. With no way to beat the best hockey team in the NHL, the Anaheim Ducks shutout the Los Angeles Kings 3-0 in front of 54,000 at Dodger Stadium on Saturday night. Corey Perry, Matt Beleskey and Andrew Cogliano put in easy goals to sweep a home series against their rivals.

Before the game began, a rock concert held by KISS opened the festivities that featured two voices no one expected to be paired together. Kings announcer Bob Miller and Dodgers legendary play by play announcer Vin Scully introduced the USC marching band that followed both teams walking onto the field with palm trees and a beach volleyball court in view. The ceremonial puck drop was done by none other than “The Great One,” Wayne Gretzky.

Hockey got underway with the Ducks taking charge of the ice in 70 degree weather that didn’t slow their pace, leading to a fight in front of the Kings’ crease. Perry took a shot on Jonathan Quick who let the puck slip between the five holes, giving the Ducks an early 1-0 lead. The toughness of the Ducks broke down the defense of Los Angeles further with Beleskey scoring on a bouncer to give the left winger his fifth of the year.

The Kings gained three chances on the man advantage with Anze Kopitar setting up for a penalty shot on Ducks goaltender Jonas Hiller. Kopitar, all alone against the Swiss netminder, shot the puck on the pads of Hiller to lose a huge chance at cutting their lead in half. Anaheim added cheap shots where they could get away with it, as Kyle Palmieri took hits on Colin Fraser in front of the Ducks’ bench. The fight didn’t cause a huge problem, but the 2-0 lead stood untouched by Los Angeles who took 20 shots to Anaheim’s seven.

The Ducks’ success on blocked shots only got better in the second, causing a much-needed fight between Tim Jackman and Kyle Clifford. The shot of adrenaline didn’t help Los Angeles as they racked up three penalties that gave Anaheim more time with the puck. The Kings’ PK unit held offAnaheim’s three power plays through the night, but the Ducks were able to hold back LA’s power play as the two-goal lead looked to be impossible to recover from. Anaheim held their opponents to half a dozen shots as the Kings took the remaining minutes of the second, only to fail on converting the puck possession into scoring.

The Ducks’ third period was spent on defense where a shutout from Hiller was closer to becoming a reality as he made 26 saves through 40 minutes. LA put their game on the table, trying anything they could to make a comeback in what was a majority of Kings fans in the stands at Chavez Ravine. The cheers of encouragement and “South Park” references couldn’t help the Kings get anything together. Los Angeles pulled Quick with 50 seconds left in regulation to go with the sixth attacker only to fall hard on home ice.

Hiller ended another big win against their Pacific Division rivals, recording his fourth shutout with 36 saves, holding a .915 save percentage. Quick earned his ninth loss stopping 18 against Anaheim in his second straight loss, but also holds a .915 save percentage. Anaheim holds a 20-point lead over Los Angeles and seven points over Chicago as they are bound to hold the top seed in the Western Conference. The Ducks host Minnesota at Honda Center on Monday night while the Kings try to figure out the problems in offense against San Jose who carries half the lead Anaheim does in second place.