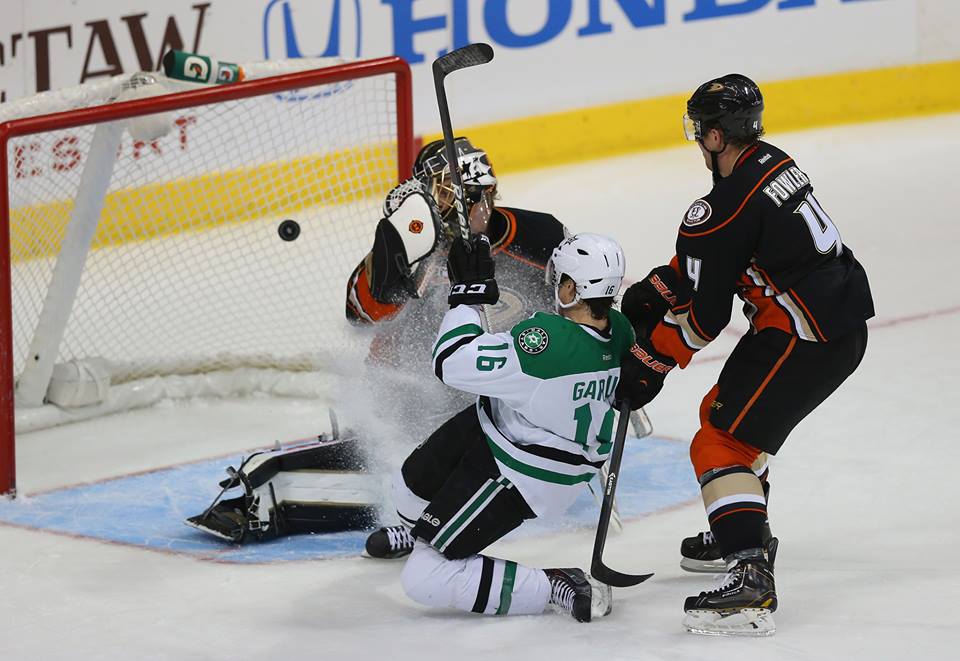 DALLAS—In what began as an even race to the finish, the Ducks tripped through the entire third period and never recovered. Dallas scored five goals with four unanswered, to embarrass the Anaheim Ducks 6-3 at the American Airlines Arena on Tuesday night.

With the Anaheim Ducks fighting for the Western Conference lead, the match against Dallas looked to be a cakewalk prior to the Thanksgiving holiday.Dallas sat in fifth place in the Central Division 12 points behind the lead.Anaheim answered with Long Beach native Emerson Etem scoring his sixth of the season on a wrist shot that caught Dallas netminder Dan Ellis off the mark on a fake shot from Daniel Winnik on the stick side. The Ducks strong offense and quick movements of the puck gave them the leverage needed outshooting Dallas 14-9.

The second period went to Dallas by a hair, as Antoine Roussel scored his third to tie the game on a pass in front of the net. The Ducks came back in the final seconds with Nick Bonino scoring his seventh on a hard angle that somehow found the back of the net. Anaheim looked to be in great shape as they held the lead and showed that they were a force to be reckoned with in the West. What happened during the second intermission came as a shock to all.

Five minutes into the third period is when the Ducks completely lost the game. Cody Eakin scored his sixth of the season as they easily gained possession in their zone to even the game at two. Stephane Robidas scored 25 seconds later on a shot that went through the Ducks notching his fourth of the year.

Ryan Garbutt scored by outskating Cam Fowler to go up 4-2 in less than a minute. Garbutt earned an assist on a drive that deflected off of Roussel for his second of the night giving the Stars a comfortable 3 goal lead.

After what seemed to be a never ending massacre, the Ducks found what energy they could attain to respond on a goal from Dustin Penner during the man advantage and recorded his seventh for the team. The Ducks went for the sixth man pulling Jonas Hiller, who surprisingly stayed in the game to watch Dallas right winger Alex Chiasson score his seventh on the empty net putting the nail in Anaheim’s coffin.

A slip on the Ducks defense turned into a letdown as Dallas took 14 shots on net in what most games see twice the number. The game was clearly a factor of tenacity and as shocking as it was to see the Ducks fall apart, the hope that a repeat doesn’t appear on the horizon will be the first thing on their minds when Anaheim returns to action against the Calgary Flames Friday night.