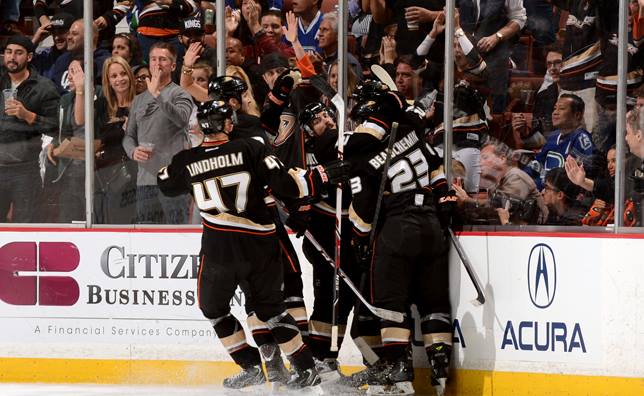 AHAHEIM—As the Canucks continued to struggle on the road, their battle against Anaheim was no better. After losing their last three games on the road, the Anaheim Ducks showed strength in the second period to hang on to a 3-1 win over Vancouver at Honda Center on Sunday, November 10.  Perry’s opening goal to close with Andrew Cogliano’s game winner left the Canucks skunked.

After taking a rough beating from the Kings on Saturday, Vancouver showed strength during the first period with 13 shots to the net, while dealing withAnaheim’s first power play opportunity. The penalty killing unit prevailed in the first, but Anaheim’s defense on the fore check and support of goaltender Frederik Andersen kept the game scoreless.

The Ducks slow start on offense in the first lead to a different approach eight and half minutes into the second as Corey Perry scored his team leading 11th goal on a tip in from Beauchemin’s long drive. Perry fought past Vancouvergoalie Eddie Lack who took over in Vancouver’s loss against the Kings. Left Winger Tom Sestito evened the score with the Ducks on a wrist shot during a three man play that let Brad Richardson send the puck to Sestito on the side of the net for his first of the year.

Nick Bonino scored five minutes later on a snap shot from the glove side of Lack to regain their single goal margin. Vancouver outshot Anaheim 16-11 with two power play chances that were not successful.

The Ducks ran the pace of the third period holding Vancouver and themselves to seven shots leading to the end of regulation. Before the horn could sound, the Canucks who went for the sixth man in a desperate attempt to scratch out a win had trouble clearing it from their end. The Ducks noticed the Canucks troubles and a scramble on the boards was won by Cogliano to score his fifth on the empty net. That sealed the endless troubles that Vancouverhas faced losing all four road trip matches.

The Ducks are on cloud nine with an eight game winning streak at home. They are the hottest team in the NHL with five wins in a row and lead the league overall with 31 points. The Ducks will have to hold their fire on a four game trip facing the Florida Panthers on Tuesday in their quest to have a strong hold of the Pacific Division lead.