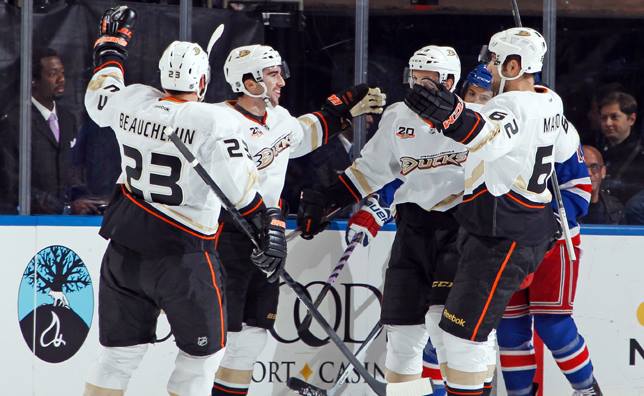 The Ducks opened scoring at 2:29 into the first period with a wrist shot from Corey Perry in front of Rangers netminder Henrik Lundqvist to give him his ninth goal on the year. Perry made point near the crease while his team passed the puck where Dustin Penner found Perry open for the shot. Kyle Palmieri scored his fourth on a steal from Francois Beauchemin in the neutral zone where a pass on the stick side of Lundqvist set Palmieri with the open lane shot to make it 2-0.

The Rangers ran the second period in an effort to regroup and make their way back into contention in just their fourth game back at Madison SquareGarden. They cut the lead with 90 seconds left in the second when Michael Del Zotto scored his first on a fight in front of Ducks goaltender Frederik Andersen. Del Zotto came from the back of the pack to shoot the puck through traffic and end Andersen’s chance of a career shutout as a rookie.

The 24-year-old Dane didn’t falter in the third period, making big saves on Ryan McDonagh’s shot and rebound attempt including a 2 on 1 breakaway with the big save was all New York had left in the tank. The victory gave the Ducks their second over the Rangers in the two meetings scheduled between the two. While the Ducks return back to the Honda Center for a short homestand; the Rangers are set for an important match against the Pittsburgh Penguins in a division rivalry not to be dismissed.