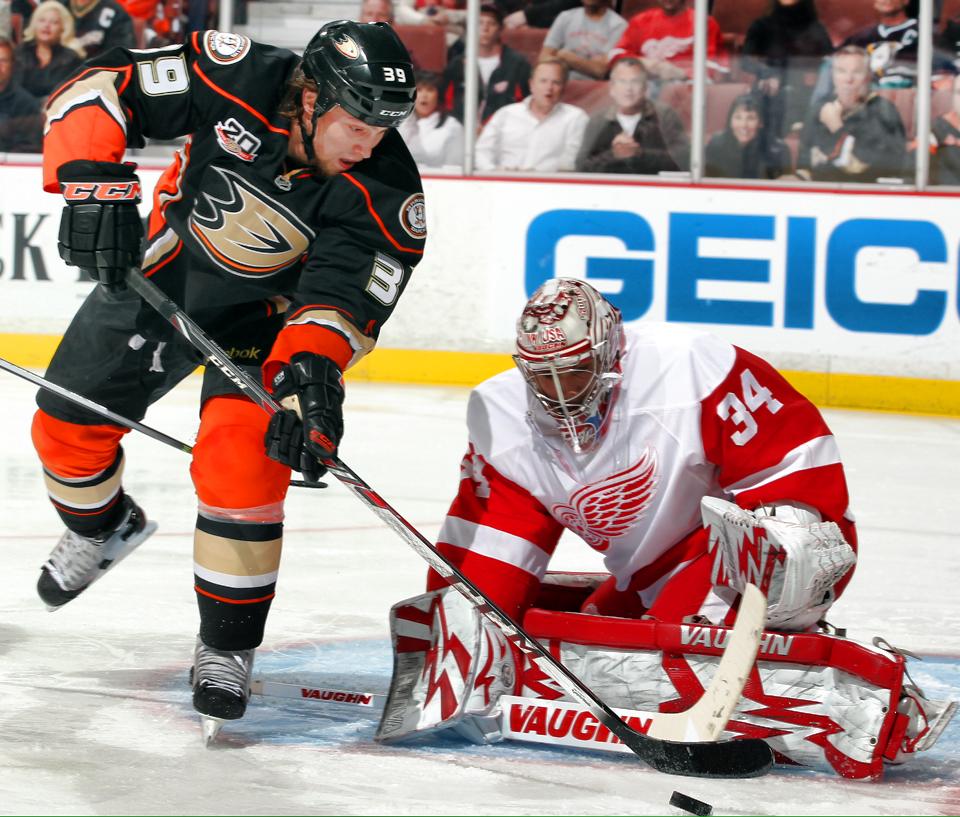 ANAHEIM—The Red Wings put on quite a battle through 60 minutes of hockey, but came up short. For the 19th time at the Honda Center, the Ducks came out on top over Detroit 1-0 on Sunday. Hiller added his 14th consecutive win in what was a battle at both nets.

The Ducks find Detroit to be their biggest challenge as of late, as they hope to hold a six-game winning streak and 18 straight at home. Their chances are endangered as the Red Wings who defeated the Los Angeles Kings 3-1 atStaples Center on Saturday could bring their power from 24 hours and put it together to bring down the giant of Orange County. Another giant in Detroit’s way is Jonas Hiller who is on a 13-game winning streak which hasn’t been matched since Detroit’s Chris Osgood pulled off the feat in 1996.

Detroit began the first period on the power play where they took the game into the Ducks’ zone showing a strong fight. Detroit gave up the puck during the middle part of the period where Anaheim shot six times on Detroitsecondary goaltender Petr Mrazek who mirrored the same game Howard put on a day ago. The Red Wings nearly got on the board with Tomas Tatar nearly scoring his fourth straight with four left in the first, but was stopped by Hiller. Detroit took seven scoring chances in a statement that they would try and be the first to strike.

Anaheim took control of the second as they wanted to grab the lead as soon as they could with a lot on the line in what used to be a heated rivalry between two former Western Conference opponents. The Ducks were the first to score with seven minutes left in the second as Andrew Cogliano took a pass from Saku Koivu on the side of the net to score his 15th goal of the season. Detroit’s biggest issue was converting on the power play as the team failed on four straight opportunities to score during the man advantage. It gave more time for the Ducks to shoot on Mrazek as they recorded nine shots.

The third period became the deciding factor on who would come out victorious. Both teams shot seven times on the net, but Anaheim’s blocked shots through the game meant that more would have to be done for Detroitto break through the Ducks’ defense. Detroit’s last chance came with four minutes left where a power play goal could have forced overtime, but it flopped for the fifth time, giving them a game not easily played.

Along with the Ducks tremendous backup of Hiller in net, the goaltender put on a strong performance making 22 saves in what recorded into his third shutout of the season. The Swiss native moves ahead of Rask for fourth place among the league’s winning goaltenders. The Ducks take a two-day break before hosting Vancouver at home while the Red Wings breathe a sigh of relief before meeting with the New York Rangers Thursday.