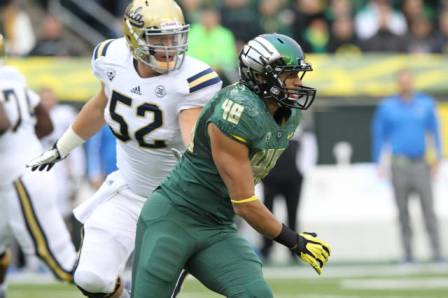 EUGENE—The Bruins had no chance of an upset on the road for the second time. Twelfth ranked UCLA stayed neck and neck with the Ducks, but a second half 28-point run from third ranked Oregon, left the Bruins dwindling off the AP poll in a 42-14 loss. Marcus Mariota threw for 230 yards and one touchdown pass that sent the Ducks ahead of Florida State for second best in the nation.

After losing to Stanford a week ago, the Bruins wanted to do their best to play an even game of football against one of the best teams on the west coast. The UCLA offense went straight to running the ball with Quarterback Brett Hundley scoring the opening touchdown on a 4-yard run into the end zone. Oregon linebacker Rodney Hardrick gave Oregon a huge rush for 66 yards to put De’Anthony Thomas in a position in the red zone to tie the game for the Ducks with a short dash.

Byron Marshall put the Ducks in the lead with a 40-yard run touchdown that left them in the lead for most of the quarter. Before the first half came to an end, Thomas Duarte caught an 11-yard pass from Hundley on the Oregon end to tie the game.

UCLA thought that a good first half would lead to a fight all the way to the end, but the Bruins struggled when Marshall took an 11-yard dash for his second touchdown to move the Ducks farther away from their PAC-12 rivals. Sophomore wide receiver Bralon Addison added another seven to Oregon’s score with an 8-yard pass from Mariota for a 14 point lead.

The game slid in Oregon’s way in the fourth with Marshall’s second touchdown rush for three yards for Oregon’s third unanswered TD. Thomas Tyner made it 42-14 with a two yard rush with two minutes left for a clean win at home. Mariota ended the game with 21 of 28 pass completions withMarshall running 133 yards on 19 carries.

The Bruins only bright light came in the first half, while their second half stats suffered greatly as Oregon made five rushes for more than 35 yards each. While the Bruins wait for their fate before hosting Colorado, the Ducks look to end the next four games staying high in the BCS standings.